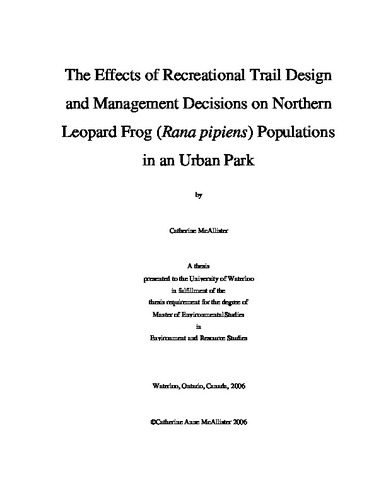 In addition to their original purpose as recreational areas, urban parks provide important habitats for species living in urban settings. Reconciling recreational and environmental goals is problematic, especially for park planners. RIM Park, in Waterloo, Ontario, is an example of this attempted reconciliation, where planners and managers attempted to conserve herpetofauna in a provincially significant wetland. However, this area includes a paved nature trail used by hikers, in-line skaters and cyclists and is adjacent to a golf course (which lies within the boundaries of the park). Herpetofauna breeding ponds were constructed and a series of culverts and clearspans included in order to provide reptiles and amphibians with safe passage under the trails. My objective was to determine whether these measures have been effective, whether the park sustains a viable population of Northern Leopard Frogs, and what factors influence frog populations in the park. Two spring field seasons involving mark and recapture techniques were attempted to estimate population sizes of Northern Leopard Frogs at RIM Park, as well as control sites. In both seasons, a control site was a cedar swamp 14 km to the west of the park within an Environmentally Sensitive Policy Area in Waterloo city limits affected by housing development and shared trails. Also within Waterloo city limits, a storm water management pond 8 km to the west was added in field season two. In 2005 (field season 1), because there was a serious drought almost no Northern Leopard Frogs were captured at the two sites examined ? RIM Park and the cedar swamp. In 2006, the more "normal" weather conditions revealed that RIM Park had significantly fewer Northern Leopard Frogs than either of the control sites. Given the lack of data in year 1, I compared the 2006 results to seven years of monitoring reports on RIM Park from consultants. The 2006 data were consistent with previous reports of small Northern Leopard Frog populations at RIM Park. Mark and recapture sessions revealed relatively low numbers, with a catch average of 4. 33 (SD = 1. 15). Calculations revealed an estimated population of 23 (SE = 13. 42). The highest number of observed Northern Leopard Frogs ever recorded at the same location in consulting reports is 5. It is likely that the ponds at RIM Park do not support breeding in Northern Leopard Frogs as the only adults caught were late in the season, during the last week of May, and adults likely were transients from the nearby wetlands and uplands. It is possible, given the historical monitoring data, that the Northern Leopard Frogs were long absent from RIM Park because of intensive farming activities that had replaced the wetlands, and that construction of the golf course and trails further precluded colonization. The lack of adult frogs in the breeding ponds and the lack of dead or injured frogs on the trails or golf course support the hypothesis that the trails are not presently causing frog mortality. It is possible that the frogs are avoiding recolonizing the trail and golf course area. It is also likely that the breeding ponds need to be deepened and only then will it be apparent whether the frogs will colonize the ponds, lay eggs, and use the clearspans and culverts. Recommendations include a shift in priorities to put the emphasis on restoration, a discussion of restoration options (including a possible restoration plan), possible improvements in amphibian monitoring techniques (such as reducing the reliance on audio methods), and general suggestions for urban park planning and management.