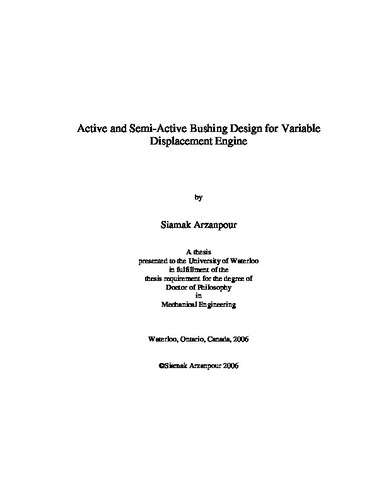 The Variable Displacement Engine (VDE) is a new generation of engines that are designed to decrease the fuel consumption at the cruise speed of a vehicle. The isolation of the VDE's new vibration pattern is beyond the capabilities of conventional mounts and bushings. Consequently, in this thesis, novel active and semi-active solutions are proposed to develop various semi-active and active hydraulic bushing proof-of-concept systems that may solve the isolation problem in a VDE system. <br /><br /> The dynamic stiffness response, which is the transfer function that relates the engine displacement to the transmitted force, is normally used as the key design criterion for engine mounts and bushings. In this thesis, a linear mathematical model of a conventional hydraulic bushing is purposed. The validity of the mathematical model is confirmed by an experimental analysis, and the various parameters in the dynamic stiffness equation are evaluated. The experimental results indicate that the dynamic stiffness frequency response of the conventional hydraulic bushing has both soft and stiff regions. The soft region is limited to low frequencies. For the VDE isolation, the goal is to provide a soft bushing for a wider range of frequencies than a conventional bushing can accommodate. Addition of a short inertia track, similar to a decoupler used in conventional hydraulic engine mounts, may be used to extend the soft region of a conventional hydraulic bushing, and the experimental results validate it. <br /><br /> Since the short inertia track provides no additional damping, a supplementary Magnetorheological (MR) valve is also devised. The MR valve has the advantage to minimize the amount of MR fluid used, which significantly reduces the cost of the overall system. The novel valve allows the damping coefficient of the bushing assembly to be controlled by varying the electrical current input to a solenoid coil. A mathematical model is derived for the MR bushing, and is validated experimentally. <br /><br /> In addition, an active bushing to solve the VDE isolation problem is purposed in this thesis. In this bushing, a magnetic actuator, composed of a permanent magnet and a solenoid coil, is included in the active bushing. This active chamber affects the dynamic stiffness response of the bushing by altering the bushing's internal pressure. The nonlinear equation of motion of the permanent magnet is linearized and is incorporated into the new mathematical model of the system. The new purposed model for the active bushing is in good agreement with the experimental results. This active chamber is also proved capable of producing complex dynamic stiffness frequency response. <br /><br /> The conclusion is that the proposals in this thesis can contribute to the isolation of the vibration pattern, imposed by the application of a VDE system.