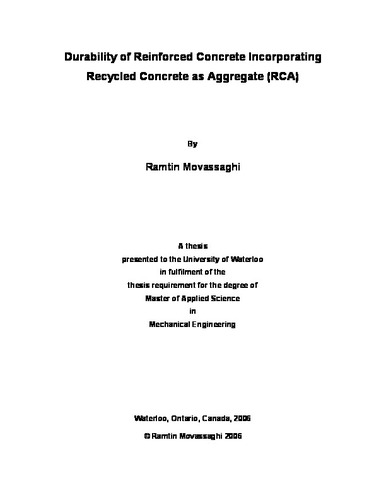 Abstract, <br /> The interest in using recycled construction materials is derived from the growth in construction and demolition waste due to rehabilitation and natural and technological disasters. The driving force for recycling concrete is three-fold: preserving natural resources, utilizing the growing waste and saving energy and money. While some waste concrete is currently being crushed and used for grading and base material for highways, it has not been used as the aggregate in new concrete in Canada, largely because of the plentiful supply of good quality virgin material. However, crushed concrete is being used in new concrete in other parts of the world where the local aggregate is inferior, and there is now a push within the Canadian cement and concrete sector to improve the industry sustainability, one aspect of which is recycling of materials. <br /><br /> The research done to date has emphasized the influence of recycled concrete aggregate (RCA) on the workability and strength of the new concrete with little attention being paid to the behaviour in service. In contrast, the present study is focused on the durability of concrete containing RCA in reinforced structures. Since the most common cause of failure of reinforced concrete structures in this part of the world is corrosion of the reinforcement by de-icing salts, the focus of the project is on this aspect of durability. The project involves a comparative study of the durability of three concrete mixtures containing, as coarse aggregate: <ol> <li>new clean recycled concrete aggregate (NC-RCA) obtained by crushing the excess concrete returned to the ready mix yard; </li> <li>old de-icing salt contaminated, recycled concrete aggregate ( OC-RCA) from a demolished bridge over Highway 401 in Ontario; </li> <li>natural aggregate as a control material. </li> </ol> These three materials were crushed and sieved to give the same grading for each mix. Natural sand was used as fine aggregate. The mixes were adjusted to account for the different water absorption characteristics of the aggregates but were otherwise identical. Prism specimens with a centrally placed reinforcing bar, cylindrical specimens and non-reinforced slabs were cast from each of the concretes. After curing, the reinforced prisms were exposed to a saturated de-icing salt solution for two of every four weeks. For the second two week period, they were allowed to dry in the laboratory atmosphere or, to accelerate the process, dried at 32°C in a low humidity (18%) chamber. <br /><br /> The electrochemical corrosion behaviour of the steel was monitored using linear polarization resistance and cyclic polarization techniques. In addition, the physical properties of the materials were assessed. For the aggregates, water absorption, chloride content and susceptibility to abrasion were determined. For the concretes, compressive strength, salt scaling resistance and chloride permeability were measured and microscopic observation of the interfacial zones between the aggregate and the new cement paste were conducted. <br /><br /> On the basis of the results, it is concluded that the durability and the strength of the RCA concrete is very dependent on the age of the RCA aggregate. Water and chloride permeability, and, salt scaling and reinforcing steel corrosion resistance of concrete made with a very well hardened old RCA were comparable with or better than those of in normal concrete. Concrete incorporating new RCA exhibited inferior properties and consequently, it is recommended that, the OC-RCA concrete can be used as a sustainable material in structural applications.