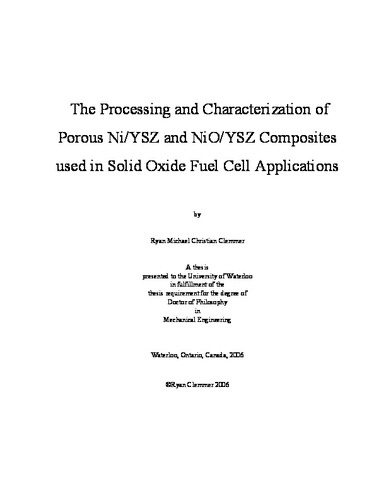 A solid oxide fuel cell (SOFC) is an energy conversion device that has the potential to efficiently generate electricity in an environmentally-friendly manner. In general, a SOFC operates between 750&deg;C and 1000&deg;C utilizing hydrogen or hydrocarbons as fuel and air as an oxidant. The three major components comprising a fuel cell are the electrolyte, the cathode, and the anode. At present, the state-of-the-art SOFC is made from a dense yttria-stabilized zirconia (YSZ) electrolyte, a porous lanthanum manganite cathode, and a porous nickel/YSZ composite anode. With the advent of the anode-supported SOFC and the increased interest in using a wider range of fuels, such as those containing sulphur, knowledge of the anode properties is becoming more important. <br /> The properties of the current anodes are limited due to the narrow range of nickel loadings imposed by the minimum nickel content for electrical conductivity and the maximum allowable nickel loading to avoid thermal mismatch with the YSZ electrolyte. In addition, there is little research presented in the literature regarding the use of nickel metal as a starting anode material, rather than the traditional nickel oxide powder, and how porosity may affect the anode properties. <br /> The purpose of this investigation is to determine the influence nickel morphology and porosity distribution have on the processing and properties of tape cast Ni/YSZ composites. Specifically, the sintering characteristics, electrical conductivity, and thermal expansion behaviour of tape cast composites created from YSZ, nickel, nickel oxide (NiO), nickel coated graphite (NiGr), and/or graphite (Gr) powders are investigated. In addition to samples made from 100% YSZ, 100% Ni, and 100% NiO powders, five composite types were created for this investigation: NiO/YSZ, NiO&Gr/YSZ, Ni/YSZ, NiGr/YSZ, and Ni&Gr/YSZ each with nickel loadings varying between 4 vol% Ni of total solids and 77 vol% Ni of total solids. Another set of composites with a fixed nickel loading of 27 vol% Ni and 47 vol% Ni of total solids and varying graphite loadings were also created. <br /> During the burnout stage, the composites made from nickel oxide powder shrink slightly while the composites made from nickel metal expand due to nickel oxidation. Graphite additions below 20 vol% of the green volume do not alter the dimensional changes of the composites during burnout, but graphite loadings greater than 25 vol% of the green volume cause significant expansion in the thickness of the composites. <br /> After sintering, the amount of volumetric sintering shrinkage decreases with higher nickel loadings and is greater for the composites made with nickel oxide compared to the composites made from nickel metal. The porosity generated in the composites containing graphite is slightly higher than the volume of graphite added to the composite and is much greater than the porosity contained in the graphite-free composites. <br /> Dimensional changes of the porous Ni/YSZ and NiO/YSZ composites during both burnout and sintering were analysed based on concepts of constrained sintering of composite powder mixtures. In some cases constrained sintering was evident, while in others, a more simple rule of mixtures behaviour for shrinkage as a function of YSZ content was observed. <br /> When nickel oxide is reduced to nickel metal during the reduction stage there is essentially no change in the composite volume for the composites containing YSZ because the YSZ prevents the composites from shrinking. After reduction the additional porosity generated in the composites is equivalent to the change in volume due to the reduction of nickel oxide to nickel metal. <br /> When measuring the electrical conductivity, each composite type demonstrated classic percolation behaviour. The NiGr/YSZ composites had the lowest percolation threshold, followed by the Ni/YSZ and NiO/YSZ composites. When graphite was added with a nickel coating, the added porosity did not disrupt the nickel percolation network and allowed the nickel to occupy a larger effective volume compared to a composite made with similar sized solid nickel particles. When graphite was added to the composites, the electrical conductivity was reduced and the percolation threshold increased. <br /> Generally, the coefficient of thermal expansion (CTE) for Ni/YSZ composites are expected to follow the rule of mixtures prediction since the elastic properties for nickel and YSZ are similar. However when porosity is distributed unevenly between the YSZ and nickel phases, the CTE prediction will deviate from the rule of mixtures. When cornstarch was added to the NiGr/YSZ composites, the CTE increased as the amount of porosity in the YSZ phase increased. The CTE of the NiGr/YSZ composites followed the rule of mixtures indicating that the porosity was evenly distributed between the nickel and YSZ phases. For the other composite types, the measured CTE was higher than the rule of mixtures prediction suggesting that more porosity was contained within the YSZ phase.