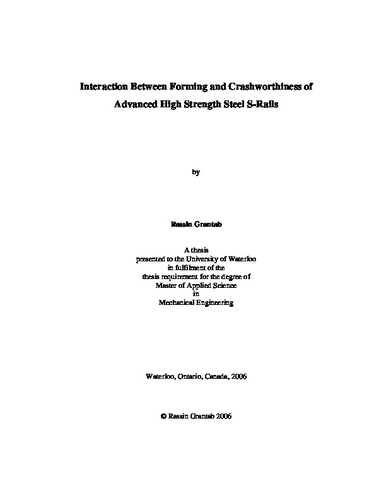 This thesis presents the results of experimental and numerical investigations carried out to assess the effects of tube bending and hydroforming on the crash performance of s-rail structures manufactured from three different advanced high strength steels, namely DDQ, HSLA350, and DP600. The main impetus for this project is to reduce vehicle weight through material substitution and, in order to do so, the effects of material strength on crashworthiness, as well as the interaction between forming processes and crash response must be well understood. To this end, in the current research, s-rails were fabricated through tube bending and hydroforming experiments conducted on DDQ, HSLA350, and DP600 steels with a nominal wall thickness of 1. 8mm, as well as HSLA350 steel with a nominal wall thickness of 1. 5mm. Impact experiments were subsequently performed on non-hydroformed and hydroformed s-rails to examine the effects of the forming processes and material substitution on the crushing loads and levels of absorbed energy. All forming and crash experiments were simulated using numerical finite element methods which provide additional insight into various aspects of the crash response of these structures. In particular, crash simulations were used to show the effects of work-hardening, material thickness changes, and residual stresses incurred during the forming operations. <br /><br /> The numerical tube bending simulations accurately predict the results of the tube bending and hydroforming processes for all materials, particularly for the DP600; the predictions for the DDQ material are the least accurate. Both simulations and experiments show that material thinning occurs on the tensile side of the bend, and material thickening on the compressive side of the bend; the level of thickness change is unaffected by material strength or initial material thickness. The low-pressure hydroforming process does not greatly affect the thickness and strain distributions of s-rails. <br /><br /> The crash simulations provide predictions that are in excellent accord with the measured results, with a maximum error of ±10% in the peak loads and energies; simulations of DP600 s-rails are the most accurate, while simulations of DDQ s-rails are the least accurate. Through simulations and experiments, it is shown that material thickness has the greatest effect on the crash performance of s-rail structures, while material strength plays a secondary role. A 20% increase in the wall thickness of HSLA350 s-rails amounts to a 47% increase in energy absorption. Substituting HSLA350 and DP600 steels in place of DDQ steel leads to increases in energy absorption of 31% and 64%, respectively, for corresponding increases in strength of 30% and 76%. Neglecting material strain-rate effects in the numerical models lowers the predicted peak loads and energies by roughly 15%. By performing a numerical parametric study, it is determined that a weight reduction of 22% is possible by substituting thinner-gauge DP600 s-rails in place of DDQ s-rails while maintaining the energy absorption of the structures.