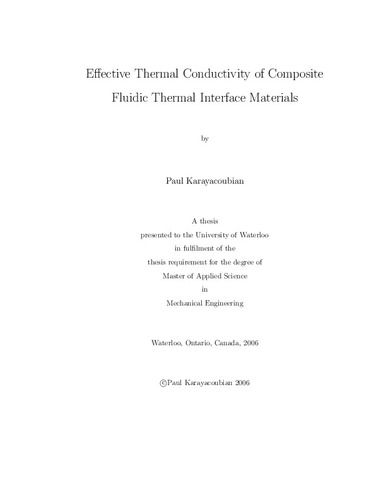 Thermally enhanced greases made of dispersions of small conductive particles suspended in fluidic polymers can offer significant advantages when used as a thermal interface material (TIM) in microelectronics cooling applications. A fundamental problem which remains to be addressed is how to predict the effective thermal conductivity of these materials, an important parameter in establishing the bulk resistance to heat flow through the TIM. <br /><br /> The following study presents the application of two simple theorems for establishing bounds on the effective thermal conductivity of such inhomogeneous media. These theorems are applied to the development of models which are the geometric means of the upper and lower bounds for effective thermal conductivity of base fluids into which are suspended particles of various geometries. <br /><br /> Numerical work indicates that the models show generally good agreement for the various geometric dispersions, in particular for particles with low to moderate aspect ratios. The numerical results approach the lower bound as the conductivity ratio is increased. An important observation is that orienting the particles in the direction of heat flow leads to substantial enhancment in the thermal conductivity of the base fluid. Clustering leads to a small enhancement in effective thermal conductivity beyond that which is predicted for systems composed of regular arrays of particles. Although significant enhancement is possible if the clusters are large, in reality, clustering to the extent that solid agglomerates span large distances is unlikely since such clusters would settle out of the fluid. <br /><br /> In addition, experimental work available in the literature indicates that the agreement between the selected experimental data and the geometric mean of the upper and lower bounds for a sphere in a unit cell are in excellent agreement, even for particles which are irregular in shape.