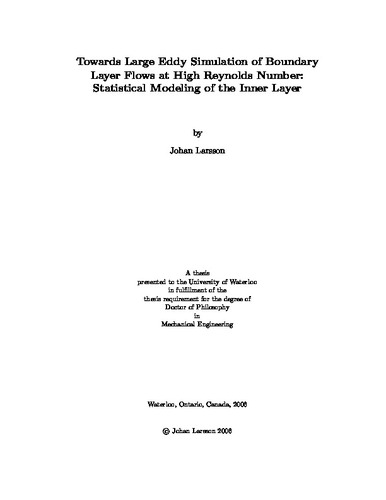 Most fluid flows of practical interest involve and are affected by turbulence. One of the most promising computational methods for the prediction of turbulent flows is the so-called large eddy simulation (LES) methodology. Experience over the past decades have shown the capability of LES to provide accurate predictions for several types of flow at a reasonable computational cost. It has also become clear, however, that the LES methodology fails when applied to boundary layer flows at high Reynolds numbers. Since many engineering applications fall in exactly that category, this failure is often considered the most severe bottleneck of LES. <br /><br /> The present thesis is an attempt to move towards a solution of this problem. Inspired by the idealized picture of a turbulent boundary layer, a statistical model is used for the approximately universal turbulence in the inner boundary layer, whereas the more flow dependent outer boundary layer is solved by LES. Ideally, this results in a computational method that provides accurate predictions of rather general turbulent flows, while maintaining a tractable computational cost. In practice, the results are a vast improvement compared to LES without any inner layer modeling, but a transition layer appears where the state of the turbulence changes from being modeled statistically to resolved by LES. This so-called 'artificial buffer layer' results in the skin friction being consistently underpredicted by 10-15%. <br /><br /> The physics and dynamics of this artificial buffer layer are investigated and characterized, and it is argued that there exist several similarities with true buffer layer turbulence. Additional forcing of the momentum equations is used as a means to trigger resolved turbulence motions more quickly, and it is demonstrated that the results are better: the artificial buffer layer is smaller, the skin friction is accurately predicted, and the dynamics in the inner layer have more correct length scales. The results with the additional forcing are very sensitive to the forcing amplitude, and a simple control algorithm for this parameter is proposed and tested with favourable results.