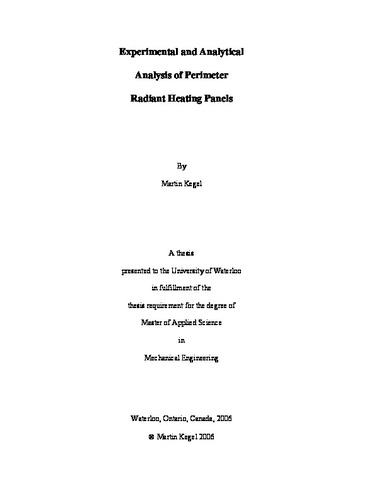 In recent years the U. S. and Canada have seen a steady increase in energy consumption. The U. S. in particular uses 25% more energy than it did 20 years ago. With declining natural resources and an increase in fuel costs, it has become important to find methods of reducing energy consumption, in which energy conservation in space heating and cooling has become a widely researched area. One method that has been identified to reduce the energy required for space heating is the use of radiant panels. Radiant panels are beneficial because the temperature set points in a room can be lowered without sacrificing occupant comfort. They have therefore become very popular in the market. Further research, however, is required to optimize the performance of these panels so energy savings can be realized. <br /><br /> An analytical model has been developed to predict the panel temperature and heat output for perimeter radiant panel systems with a known inlet temperature and flow rate, based on a flat plate solar collector (RSC) model. As radiative and convective heat transfer coefficients were required to run the model, an analytical analysis of the radiative heat transfer was performed, and a numerical model was developed to predict the convective heat transfer coefficient. Using the conventional radiative heat exchange method assuming a three-surface enclosure, the radiative heat transfer could be determined. Numerically, a correlation was developed to predict the natural convective heat transfer. <br /><br /> To validate the analytical model, an experimental analysis was performed on radiant panels. A 4m by 4m by 3m test chamber was constructed in which the surrounding walls and floor were maintained at a constant temperature and the heat output from an installed radiant panel was measured. Two radiant panels were tested; a 0. 61m wide panel with 4 passes and a 0. 61m wide panel with 8 passes. The panels were tested at 5 different inlet water temperatures ranging from 50°C to 100°C. <br /><br /> The RSC model panel temperature and heat output predictions were in good agreement with the experimental results. The RSC model followed the same trends as that in the experimental results, and the panel temperature and panel heat output were within experimental uncertainty, concluding that the RSC model is a viable, simple algorithm which could be used to predict panel performance.