Numerical Modelling of the Human Cervical Spine in Frontal Impact 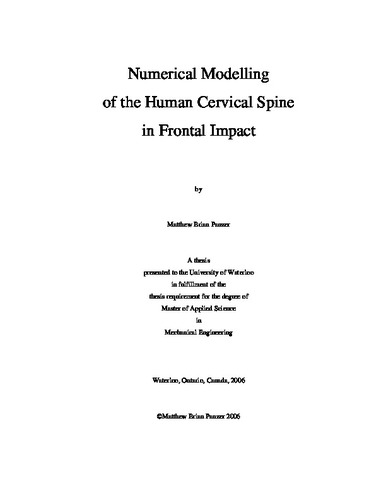 Motor vehicle accidents continue to be a leading cause of cervical spine injury despite a conscientious effort to improve occupant safety. Accurately predicting occupant head and neck response in numerical crash simulations is an essential part of the process for developing better safety solutions. <br /><br /> A biofidelic model of the human cervical spine was developed with a focus on accurate representation of the cervical spine at the local tissue level. These tissues were assembled to create a single segment model that was representative of <em>in vitro</em> spine in quasi-static loading. Finally, the single segment models were assembled to create a full cervical spine model that was simulated in dynamic loading and compared to human volunteer response. <br /><br /> Models of each segment were constructed from the basic building blocks of the cervical spine: the intervertebral disc, the vertebrae, the ligaments, and the facet joints. Each model was simulated in all modes of loading and at different levels of load. The results of the study indicate that the cervical spine segments performed very well in flexion, compression, and tension. Segment response to lateral bending and axial rotation was also good, while response in extension often proved too compliant compared to the experimental data. Furthermore, the single segment models did not fully agree with the experimental shear response, again being more compliant. <br /><br/> The full cervical spine model was assembled from the single segment models incorporating neck musculature. The model was simulated dynamically using a 15 G frontal impact test. Active muscles were used to simulate the response of the human volunteers used in the study. The response of the model was in reasonable agreement with the experimental data, and compared better than current finite element cervical spine models. Higher frequency oscillation caused most of the disagreement between the model and the experimental data, which was attributed to a lack of appropriate dynamic material properties of the soft tissues of the spine. In addition, a study into the active properties of muscle indicated that muscle response has a significant influence on the response of the head. <br /><br /> A number of recommendations were proposed that would improve the biofidelity of the model. Furthermore, it was recommended that the future goal of this model would be to implement injury-predicting capabilities through the development of advance material models.