Modeling and Control of a Magnetically Levitated Microrobotic System 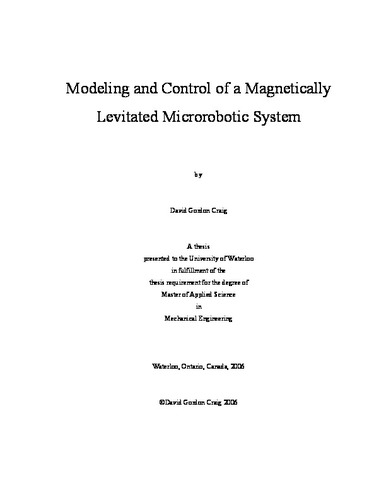 Magnetically levitated microrobotic systems have shown a great deal of promise for micromanipulation tasks. A new large-gap magnetic suspension system has recently been developed at the University of Waterloo in order to develop microrobotic systems for various applications. In order to achieve motion with the system, a model is needed in order to facilitate the design of various aspects of the system, such as the microrobot and the controller. In order to derive equations of motion for the system attempts were made to characterize the force produced by the magnetic drive unit in terms of a simple analytical equation. The force produced by the magnetic drive unit was estimated with the aid of a finite element model. The derived equations were able to predict the general trend of the force curves, and with sufficient parameter tweaking the error between the force estimated by the finite element model and the force estimated by the analytical equation could be minimized. System models describing the motion of the system in the horizontal and vertical directions are identified and compared to the actual system response. The vertical position response is identified through a least squares parameter estimate of the closed loop response combined with a partial reconstruction of the root locus diagram, with the model structure based on the known dynamics of a simplified form of magnetic levitation. This model was able to provide a reasonable prediction of the system response for a variety of PID controllers under a variety of input conditions. The horizontal models are identified using a least-squares parameter estimate of the open loop characteristics of the system. The horizontal models are able to provide a reasonable prediction of the system response under PD and PID control. Full spatial motion of a microrobot prototype is demonstrated over a working range of 20x22x30 mm<sup>3</sup>, with PID controller parameters and reference trajectories adjusted to minimize disturbances. The RMS error at steady state is on the order of 0. 020 mm for vertical positioning and 0. 008 mm for horizontal positioning. A linear quadratic regulator implemented for vertical position control was able to reduce the vertical position RMS error to 0. 014 mm.