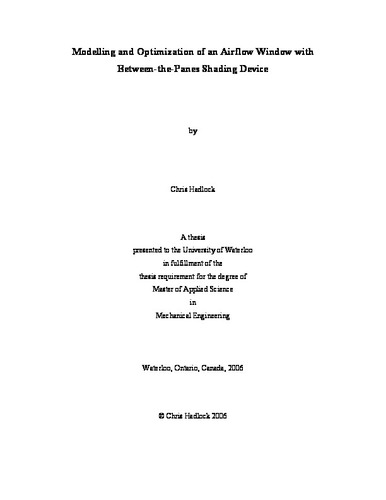 Abstract <br /> This thesis deals with the numerical investigation of the upper section of a building-integrated photovoltaic/thermal double-façade. The upper section consists of an airflow window with a between-the-panes roller blind. The purpose of this thesis is to develop and validate a numerical model in order to optimize the design of the system. The lower section, which consists of building-integrated photovoltaics, has already been modelled at Concordia University. The results from the lower section will be used as inputs to the upper section. <br /><br /> The validation of the model was carried out in three stages. In the first stage, the model was validated for forced convection between parallel plates using analytical data as benchmarks. In the second stage, a radiation analysis was performed for single, double and triple-glazed closed system with natural convection only. In the third and final validation stage, experimental data gathered from the Solar Lab at Concordia University was compared to the numerical model. The model included the effects of radiation for an open system with forced convection and a between-the-panes roller blind. For all three stages of validation, the results from the model were in excellent agreement with the benchmarking data. <br /><br /> Once the model was validated, a parametric analysis was used to determine the effects of varying key model parameters. The outlet temperature, the useful energy gain, and the net energy gain of the system were plotted as a function of inlet velocity. It was concluded that as the flow rate through the cavity was increased, the air temperature at the outlet approached that of the outdoor ambient air. By computing the heat generated from advection as well as the total losses from the system, including the heat lost from the indoor environment as well as the power consumed by the fan, the net useful heat gain of the system was calculated as a function of insolation level. Operating points (of the fan) for the upper section were therefore determined as functions of insolation level. A second order polynomial equation provided an excellent fit to the data and could therefore be used to determine the ideal operating point of the upper section for any insolation level.