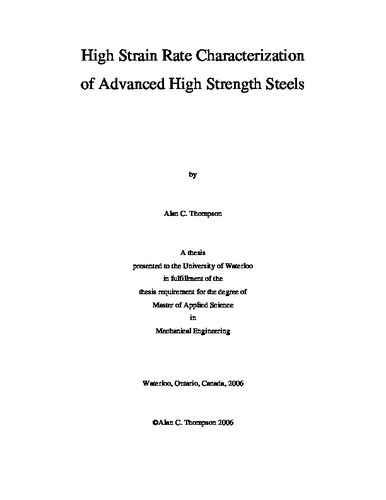 The current research has considered the characterization of the high strain rate constitutive response of three steels: a drawing quality steel (DDQ), a high strength low alloy steel (HSLA350), and a dual phase steel (DP600). The stress-strain response of these steels were measured at seven strain rates between 0. 003 s<sup>-1</sup> and 1500 s<sup>-1</sup> (0. 003, 0. 1, 30, 100, 500, 1000, and 1500 s<sup>-1</sup>) and temperatures of 21, 150, and 300 °C. In addition, the steels were tested in both the undeformed sheet condition and the as-formed tube condition, so that tube forming effects could be identified. After the experiments were performed, the parameters of the Johnson-Cook and Zerilli-Armstrong constitutive models were fit to the results. <br /><br /> In order to determine the response of the steels at strain rates of 30 and 100 s<sup>-1</sup>, an intermediate rate tensile experiment was developed as part of this research using an instrumented falling weight impact facility (IFWI). An Instron tensile apparatus was used to perform the experiments at lower strain rates and a tensile split-Hopkinson bar was used to perform the experiments at strain rates above 500 s<sup>-1</sup> <br /><br /> A positive strain rate sensitivity was observed for each of the steels. It was found that, as the nominal strength of the steel increased, the strain rate sensitivity decreased. For an increase in strain rate from 0. 003 to 100 s<sup>-1</sup>, the corresponding increase in strength at 10% strain was found to be approximately 170, 130, and 110 MPa for DDQ, HSLA350, and DP600, respectively. <br /><br /> The thermal sensitivity was obtained for each steel as well, however no correlation was seen between strength and thermal sensitivity. For a rise in temperature from 21 to 300 °C, the loss in strength at 10% strain was found to be 200, 225, and 195 MPa for DDQ, HSLA350, and DP600, respectively for the 6 o?clock tube specimens. <br /><br /> For all of the alloys, a difference in the stress ? strain behaviour was seen between the sheet and tube specimens due to the plastic work that was imparted during forming of the tube. For the DP600, the plastic work only affected the work-hardening response. <br /><br /> It was found that both the HSLA350 and DDQ sheet specimens exhibited an upper/lower yield stress that was amplified as the strain rate increased. Consequently the actual strength at 30 and 100 s<sup>-1</sup> was obscured and the data at strain rates above 500 s<sup>-1</sup> to be unusable for constitutive modeling. This effect was not observed in any of the tube specimens or the DP600 sheet specimens <br /><br /> For each of the steels, both the Johnson-Cook and Zerilli-Armstrong models fit the experimental data well; however, the Zerilli-Armstrong fit was slightly more accurate. Numerical models of the IFWI and the TSHB tests were created to assess whether the experimental results could be reproduced using the constitutive fits. Both numerical models confirmed that the constitutive fits were applied correctly.