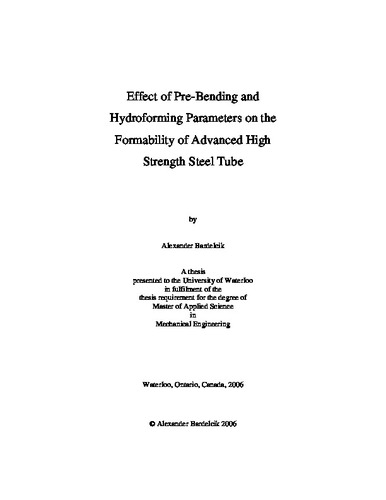 With increasing fuel costs and the current drive to reduce greenhouse gas emissions and fuel consumption, a need to reduce vehicle weight is apparent. Weight reduction can be achieved by replacing conventionally stamped structural members with hydroformed parts. The weight reduction can be further enhanced by reducing the thickness of the hydroformed members through the use of advanced high strength steel (AHSS). A primary limitation in hydroforming AHSS, is the limited ductility or formability of these materials. This limitation becomes acute in multi-stage forming operations in which strain path changes become large making it difficult to predict formability. Thus, the focus of the current work is to study the effects of pre-bending on the subsequent hydroformability of Dual-Phase DP600 steel tubes. As part of this effort, the effect of key bending and hydroforming process parameters, bending boost and hydroforming end-feed, have been studied in a parametric fashion. <br /><br /> Multi-step pre-bending and hydroforming experiments were performed on 76. 2 mm (3. 0") OD tubes with a wall-thickness of 1. 85mm (DP600). Experiments were also performed on 1. 74mm Interstitial Free (IF) steel tube, which provided a low strength, high formability baseline material for comparison purposes. A fully instrumented servo-hydraulic mandrel-rotary draw tube bender was used in the pre-bending experiments in which various levels of boost were applied. The results showed that increased boost reduced the major (tensile) strain and thinning at the outside of the bend. At the inside of the bend, the compressive minor strain became larger and thickening increased. <br /><br /> Hydroforming of the straight and pre-bent tubes was conducted using various levels of load-control end-feed (EF). For both straight and pre-bend tube hydroforming, an increase in hydroforming EF resulted in increased burst pressure and corner-fill expansion (CFE). The effect of bending boost on CFE was also measured. For a given hydroforming EF case, a tube bent with greater boost achieved a higher burst pressure and consequently a greater CFE which increased the hydroformability of the material. Pre-bending was shown to consume a considerable amount of the formability of the tube in the hydroforming experiments. For the same EF case, the pre-bent tubes could only achieve a fraction of the straight tube CFE at burst. <br /><br /> The pre-bending and hydroforming experiments were complimented by finite element simulation in the hope of providing additional insight into these processes. The finite element (FE) models were able to accurately predict the strain and thickness changes imposed during pre-bending. The models were able to accurately predict the CFE, EF displacement, and strain and thickness distributions after hydroforming. <br /><br /> The extended stress-based forming limit curve (XSFLC) failure criterion was applied to predict failure (onset of necking) during hydroforming, which was measured as the burst pressure in the experiments. For straight tube hydroforming, the XSFLC predicted the correct failure pressure versus hydroforming EF load trend, but over predicted the failure pressures. In pre-bend hydroforming, the models were able to capture the effect of bending boost and hydroforming EF on the hydroformability of the tubes. The XSFLC was able to capture the drop in formability for bending versus straight tube hydroforming, but was unable to capture the failure pressure versus hydroforming EF load trend or magnitude. Further work is required to make the XSFLC applicable to straight and pre-bend hydroforming.