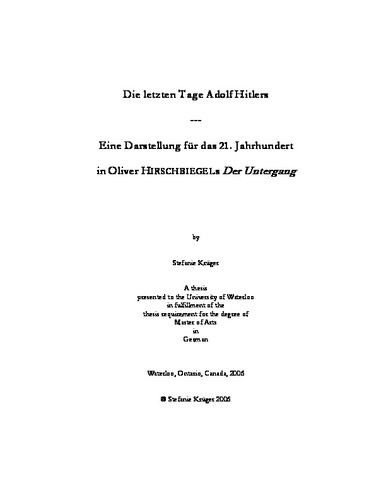 The film <em>Der Untergang</em> (2004), directed by Oliver HIRSCHBIEGEL and written and produced by Bernd EICHINGER, is based on Joachim FEST's historical monograph <em>Der Untergang</em> (2002) and Traudl JUNGE's and Melissa MÜLLER's <em>Bis zur letzten Stunde</em> (2003). Taking place in April, 1945, the movie depicts the last days of Adolf Hitler and his staff in the 'Führerbunker'. The appearance of the film sparked wide-spread controversy concerning the propriety of Germans illuminating this most controversial aspect of their history. Specifically, the debate centred on the historical accuracy of the film and the dangers associated with the filmmakers' goal of portraying Hitler not as a caricature or one-sided figure but rather as a complete human being whose troubles and human qualities might well earn the sympathy of the viewers. <br /><br /> After surveying a variety of films that portray Adolf Hitler, the thesis analyses <em>Der Untergang</em> by focusing first on the cinematic and narrative aspects of the film itself and then on the figure of Hitler. It aims to demonstrate that the presentation of Hitler as a complex character reflects the circumstances of the film's time and culture. In particular, this thesis discusses two main aspects: first, it describes a figure of Hitler constructed in the film and conveyed to the viewers; second, it demonstrates that the film's construction of Hitler is embedded in the sociocultural context of the film's creation, thereby establishing that this is a Hitler for contemporary German society and the current state of German culture's reckoning with its fascist past. <br /><br /> The results of the analysis, in particular the depiction of Hitler and the representation of death and suicide, demonstrate that the film presents a multiple point of view. The film also faces the problematic issue of representing history adequately. The consideration of the German sociocultural context brings up some reasons that can explain the increased interest in the personal side of the perpetrators and especially in the figure of Hitler. <br /><br /> Finally, this thesis maintains that <em>Der Untergang</em> gives a complex but subsequently inconsistent picture of Adolf Hitler because it gets entangled by the attempt to be informative and entertaining at the same time. Though the film cannot replace historical investigation and analysis, it still informs Germans about Adolf Hitler and reflects how their society deals with its own troubled past.