Sentimentalism, Affective Response, and the Justification of Normative Moral Judgments 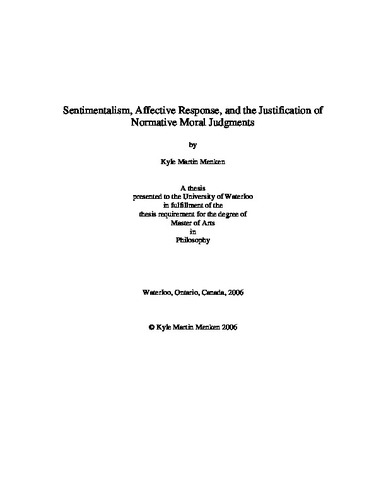 Sentimentalism as an ethical view makes a particular claim about moral judgment: to judge that something is right/wrong is to have a sentiment/emotion of approbation/disapprobation, or some kind of positive/negative feeling, toward that thing. However, several sentimentalists have argued that moral judgments involve not only having a specific kind of feelings or emotional responses, but judging that one would be <em>justified</em> in having that feeling or emotional response. In the literature, some authors have taken up the former position because the empirical data on moral judgment seems to suggest that justification is not a necessary prerequisite for making a moral judgment. Even if this is true, however, I argue that justifying moral judgments is still an important philosophic endeavour, and that developing an empirically constrained account of how a person might go about justifying his feelings/emotional responses as reasons for rendering (normative) moral judgments by using a coherentist method of justification is both plausible and desirable.