Progressive Disc Herniation: An investigation of the mechanism using histochemical and microscopic techniques 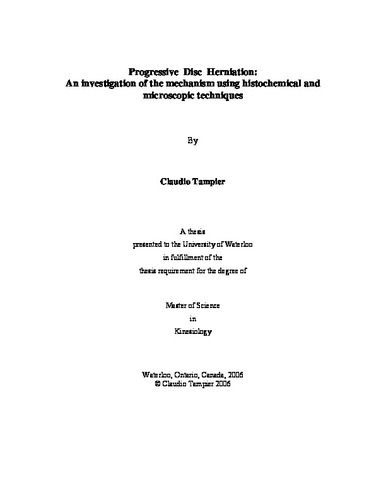 Abstract Background: The process that involves the migration of the nucleus pulposus from the innermost annular layers and culminates with the final extrusion of the nucleus has been limited to a few studies. This investigation was directed towards a better understanding of the herniation process. The architecture of the annulus fibrosus and the mechanism of progressive disc herniation were analyzed, using a controlled porcine model. Microscopic and histochemical techniques were employed. <br /><br /> Methodology: Two studies were performed. In the first stage, the macroscopic and microscopic structures of twelve cervical intervertebral discs were compared with young human disc data from studies reported in the literature. Important structural features were studied such as annulus fibrosus thickness, number of lamellae, lamellae thickness, orientation of the lamellae fibers and blood supply. In the second study, sixteen fresh-frozen functional spine units were submitted to repetitive flexion?extension motions combined with a low compressive load in a servo-hydraulic dynamic testing system. Discograms, dissections and histochemical techniques were applied to characterize the cumulative damage. The experiment produced eight complete herniations, four partial herniations and four specimens without any microscopic detectable annular damage. <br /><br /> Results and Discussion: The structure of the cervical porcine disc resembles the lumbar human disc. Some differences are evident. The size of the annulus is smaller, the thickness of the lamellae is narrower and the number of layers is fewer in the pig. It is hypothesized that the flexion-extension motion combined with a low-level load produced an increased hydraulic pressure in the inner wall of the posterior annulus. This pressure and repetitive motion first produced a small cleft, spreading the collagen bundles inside the first layer. The nuclear material was "pumped" through the small cleft to the first layer filling the layer creating a fluid-filled pocket between the collagen fibers. Once the "pocket" acquired enough pressure a new cleft was produced in the weakest part of the layer allowing the nuclear material to create a new "pocket" in the second layer. This was the first stage of damage and disc herniation production. This mechanism was repeated until the nucleus traveled along the annulus reaching the posterior longitudinal ligament. At this point a complete extrusion herniation was produced. <br /><br /> Conclusion: The porcine model appears to be suitable as a model to understand the mechanism of disc herniation when the spine is subjected to flexion-extension motions combined with a low-level load. The first cumulative injury appears to be a cleft between the lamellae bundles produced by the nuclear hydraulic pressure. A cumulative load/cumulative injury model approach was used to create the damage that was quantified in the study.