Determinants of HIV Testing in East African Communities in Toronto 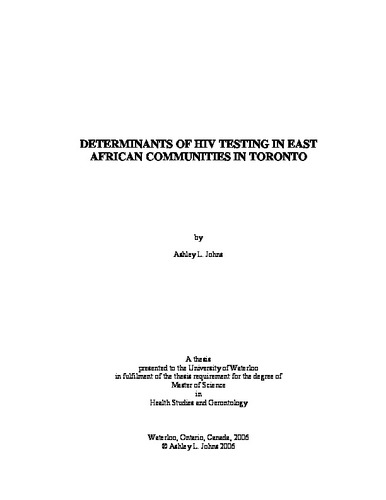 <strong>Background. </strong> Previous evidence suggests that persons who have emigrated from HIV-endemic countries experience higher rates of HIV infection and delayed diagnosis. Despite this evidence, limited research has examined HIV testing in these populations. <br /><br /> <strong>Objectives. </strong> To examine factors associated with HIV testing, as well as motivations underlying testing behaviour, within five East African communities in Toronto. <br /><br /> <strong>Methods. </strong> Secondary data analyses were conducted using cross-sectional data collected in face-to-face interviews with people from Toronto's Ethiopian, Kenyan, Somali, Tanzanian, and Ugandan communities. Logistic regression techniques were employed to assess factors associated with "ever vs. never testing," "repeat vs. non-repeat testing," and "independent vs. directive testing. " Reasons provided for testing and not testing were described. <br /><br /> <strong>Results. </strong> Individuals from all five communities were interviewed (n=270). Males were slightly over-represented (55. 9%). The average age was 35. 7 yrs (range 17-71). Three-quarters (75. 6%) of the sample had been tested for HIV. Two-thirds (65. 7%) of testers had tested more than once and 40. 7% had independently decided to get their most recent test. 71. 1% of testers reporting previous testing for immigration purposes. Testing behaviour varied greatly across communities. Ethnicity was predictive of "ever" and "repeat" testing. Risk behaviour (including multiple sex partners, concurrent sex partners, condom non-use, and/or improper condom use) was overwhelmingly not associated with testing. Fear of exposure through sexual activity was the most frequent reason for independent testing. Immigration authorities were the most common person to initiate directive testing, followed by physicians. Low perceived risk was the most common reason for not testing. <br /><br /> <strong>Conclusions. </strong> Testing rates within this population were quite high and the immigration process heavily impacted upon testing behaviour. Many determinants and motivations of testing have been identified and should be used to inform the design of interventions to promote testing behaviour in these communities. Nevertheless, many gaps have been identified by the current research and should be addressed by future research.