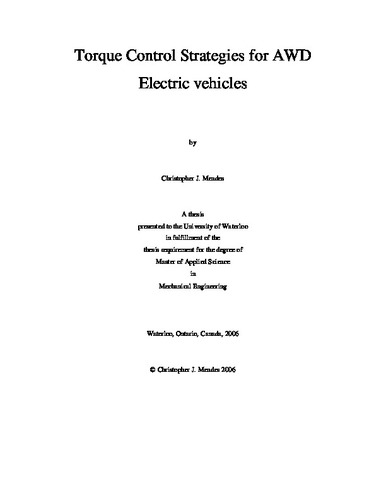 There is a fundamental shift occurring in the design of passenger vehicles for North American markets. While for decades automotive manufacturers have relied on internal combustion engines burning fossil fuels, the early 21st century has seen a departure from conventional thinking about powertrain design towards two new design paradigms: hybrid electric vehicles (HEVs), and fuel cell vehicles (FCVs). Hybrid electric vehicles incorporate a high power electric motor and an electrical storage system which are used for motive power in addition to their conventional internal combustion engine (ICE). Fuel cell vehicles use a stack of individual cells to produce electric power which is then used in an electric motor to move the vehicle. They are generally fueled by a stream of high purity hydrogen, and produce only water as an emission. Both vehicle types use electric motors as an integral component in their configuration. The objective for this thesis is to propose a control strategy for the traction motors of a hybrid or electric vehicle. In particular, it addresses the question of how to split torque between two onboard electric motors while considering the efficiency, stability, and traction of the vehicle. This work is based upon two hybrid vehicles: a Chevrolet Equinox converted to a Fuel Cell HEV, and a Chrysler Pacifica converted to an internal combustion engine HEV. A torque control strategy is recommended that focuses on improved efficiency while addressing vehicle stability, and traction control. The strategy also incorporates powertrain component protection. Simulations indicate that the manner in which torque is split between the motors can have a large impact on the total efficiency of the powertrain; greater than 7% improvement fuel economy is projected by using an intelligent torque control system over a iii FTP-75 drive cycle. It is recommended that this work be extended to incorporate regenerative braking and a more thorough analysis of vehicle stability and drivability.