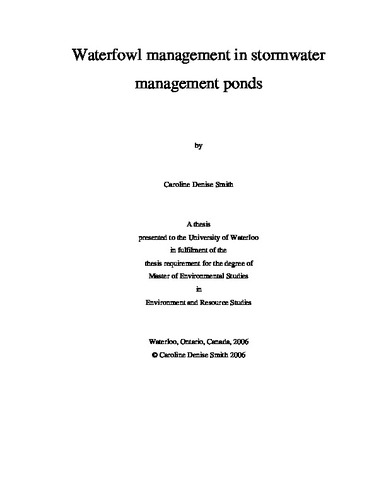 Urbanization, which is ever increasing on a global scale, can negatively affect wildlife and habitat as well as biotic realms including air, soil, and water. One of the impacts of urbanization is urban runoff. A method commonly employed to mitigate runoff is the construction of stormwater management ponds (SWMPs). These ponds have created new habitat for urban wildlife, especially waterfowl such as Canada geese and mallard ducks. In some municipalities, increased numbers and densities of waterfowl near SWMPs are considered a nuisance due to their large numbers, considerable amount of fecal matter and because they may create health hazards. This research specifically examines the influence of species composition and height of vegetation around SWMPs on waterfowl use and whether changes in Escherichia coli counts are attributed to waterfowl use. Ponds were visited 140 times between April 2005 and June 2006. At each site, the number of Canada geese, mallard ducks, and other waterfowl species was recorded. Geese significantly preferred ponds with short vegetation (F = 53.45, p < 0.0001) and ducks exhibited no preference (F= 2.17, p = 0.347). The time (day) that observations were made was a factor indicating that there were temporal variations among seasons; geese were slightly more affected by time (F = 16.08, p < 0.0001) than ducks (F = 11.18, p < 0.001). This was not surprising given that waterfowl generally migrate locally across seasons. This result also supported the hypothesis that geese respond to changes in vegetation height. The influence of time coincides with the development of vegetation between spring and summer. Geese moved to the ponds with short vegetation as the growing season progressed, whereas they tended to avoid ponds with more naturalized vegetation due to the increased height. From a management perspective, municipalities can discourage nuisance geese at SWMPs through the naturalization of ponds and decreasing the level of maintenance via less mowing. There was no significant correlation between waterfowl use of ponds and E. coli counts. The Pearson’s correlation ranged from -0.152 to 0.990, associated p values ranged from 0.07 to 0.981. While further study is required, it appears that waterfowl do not offer any noticeable addition of E. coli to stormwater management ponds beyond what is already in the water column from other sources. Therefore, waterfowl may not present a health threat, at least within the pond itself.