The Formation and Run-off of Condensate on a Vertical Glass Surface: An Experimental Study 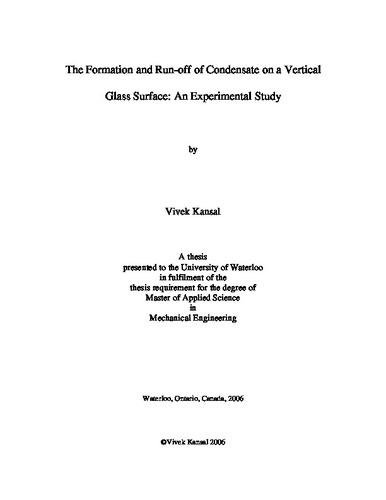 An experimental study of condensate was performed by exposing a sheet of glass, cooled at its bottom edge, to an enclosure with a controlled environment. The air in the enclosure was maintained at a constant relative humidity (RH) and a constant dry bulb temperature (Tdb). Experiments were conducted at Tdb = 22.1°C and RH of 30%, 35%, 40%, 45%, and 50%. It was found that the time until initial condensation run-off was sensitive to low RH (RH = 30%, 35%, 40%) and insensitive to high RH (RH = 45%, 50%). Time until run-off decreased with increasing RH. It was found that, at first, condensation run-off occurred near the bottom of the glass and left one to believe that the remaining condensate was in steady state with the enclosure. Over a 16 hour period however, it was found that the condensation run-off front, in every case, progressed upward to include the entire condensate area. Similar to time of initial run-off, speed of condensation front movement increased with RH and was also insensitive at high RH. A summary plot showing run-off front position is presented. This chart can be used to predict initial run-off and front progression at the bottom edge of any window if the surface temperature profile is known.

Vivek Kansal (2007). The Formation and Run-off of Condensate on a Vertical Glass Surface: An Experimental Study. UWSpace. http://hdl.handle.net/10012/2695