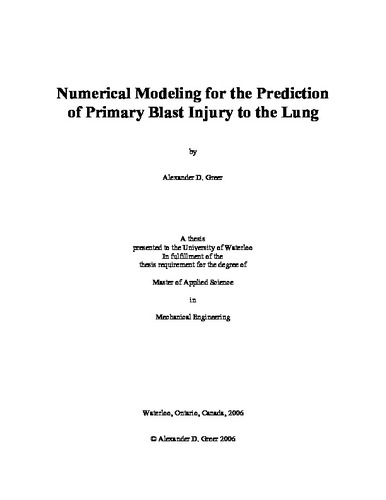 As explosive blasts continue to cause casualties in both civil and military environments, there is a need for increased understanding of the mechanisms of blast trauma at the organ level and a need for a more detailed predictive methodology. A fundamental understanding of blast injury will lead to the development of improved protective equipment and ultimately reduce the severity of injury. Models capable of predicting injury to varied blast loading will also reduce the emphasis on animal blast testing. To provide some historical context, this research was begun shortly after the U.S. led invasion of Iraq, and came to a close while there continues to be daily loss of life from blast injuries in the Middle East, as well as continued threats of terrorism throughout the world. In addition to industrial accidents, it is clear that blast injury is far more than just a military concern. Simplified finite element models of the human and sheep thoraces were created in order to provide practical and flexible models for the prediction of primary blast injury in simple and complex blast environments, and subsequently for the development of improved protective equipment. The models were created based on actual human and sheep geometries and published material properties. The fluid-structure interaction of the models compared well with experimental blast studies carried out during the course of the research, as shown by comparing actual and predicted overpressures in the free field and at the thorax. By comparing the models to published experimental data from simple blasts, trends in the results were verified and peak lung pressure was proposed as a trauma criterion. Local extent of injury in the lung is correlated to the peak pressure measured in each finite element, categorized as no injury (< 60 kPa), trace (60-100 kPa), slight (100-140 kPa), moderate (140-240 kPa) and severe (> 240 kPa). The calculation of the mean value of the peak lung pressures of all of the finite elements allows for an overall estimate of the injury level, with 35 kPa predicting threshold damage, 129 kPa for one percent lethality, and 186 kPa for fifty percent lethality. The simple blast results also compared well to the predictions of two previously validated mathematical models. Variation of predicted injury within a given loading severity was 15%, which is comparable to the model by Stuhmiller that had a variation of 20%. The model by Axelsson had very little variation (1.4%), but the differences between levels of severity were quite small, and often difficult to decipher. In addition to predicting consistent levels of injury, the finite element models were able to provide insight into the trauma mechanism, map the extent of injury through the lungs, and validate a local injury criterion. The models were then applied to predict injury under complex blast loading by subjecting the human finite element torso to a threshold level blast while located at varying distances from a wall or a corner. The results compared well to the validated mathematical models, showing a sharp increase in injury severity as the model approached the reflecting surface. When directly against the wall, the mean of the peak lung pressure values was 57 kPa, and in the corner, the mean value reached 69 kPa. Although these values did not reach the level representing one percent lethality, they do represent a significant increase in injury above threshold as a direct result of the surrounding geometry. Once again, the finite element models correctly showed injury trends and lung injury patterns reported in experiments. The models predicted the level of injury and were able to predict the time varying pattern of injury, which is something existing models cannot do. Having designed the models from physical principals, and having validated the models against published results, they can now be used in the continued development of protective equipment. Acknowledging that this model was the first iteration, the author believes that improvements in material properties, mesh refinement, and the investigation of other possible parameters for the prediction of injury will lead to substantial advances in the understanding of primary blast injury.

Alexander Greer (2007). Numerical Modeling for the Prediction of Primary Blast Injury to the Lung. UWSpace. http://hdl.handle.net/10012/2642