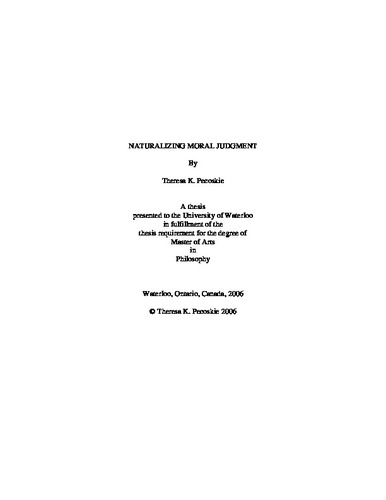 Philosophers have traditionally attempted to solve metaethical disputes about the nature of moral judgment through reasoned argument alone. Empirical evidence about how we do make moral judgments is often overlooked in these debates. In the wake of recent discoveries in cognitive neuroscience and experimental psychology, however, some empirically-minded philosophers are beginning to use neural findings in support of their theories of moral judgment. The intent of this thesis is to explore how this empirical evidence can be integrated effectively into philosophical discussions about moral judgment. In the first chapter of my thesis, I review the moral judgment debate in both philosophy and moral psychology, focusing specifically on contemporary sentimentalist solutions to this problem. This review sets the stage for my critique of Prinz’s sentimentalist account of moral judgment in the second chapter. I argue that Prinz uses neural evidence to support his sentimentalist thesis inappropriately, altering the evidence to fit his theory, rather than using the evidence to inform his theory. In the third chapter, I examine Prinz’s somatic theory of emotion and how this is related to his theory of moral judgment. I argue that neural evidence indicates that a theory of emotion that incorporates aspects of both cognitive appraisal and somatic theories is more empirically accurate than either view in isolation. Finally, I discuss the implications that a neural account of emotion could have on future debates about the nature of moral judgment.