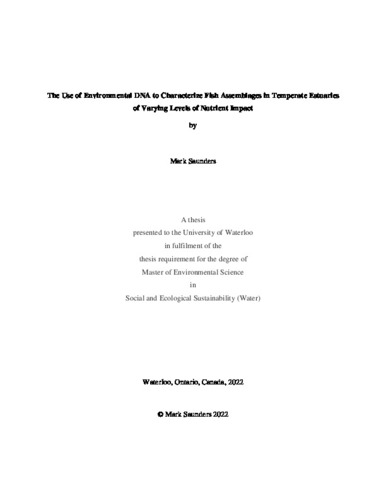 The inner region has been identified as an important area for evaluating the health of estuaries, as many riverine inputs, like excessive nutrients (eutrophication), are more concentrated here than in the lower reaches of the estuary. However, the inner estuary’s fish assemblage is undersampled in Canada’s southern Gulf of Saint Lawrence due to issue of accessibility, and avoidance due to high macroalgal biomass. To help address these issues, this dissertation investigated the inner estuary’s fish assemblage with novel methods for evaluating these assemblages. Chapter 3 assessed whether the inner estuarine region possessed distinct nearshore fish assemblages relative to the middle and outer estuarine regions. The abundance of northern mummichog (Fundulus heteroclitus macrolepidotus) was also investigated as a potential indicator of estuarine eutrophication to simplify the sampling effort. Three Prince Edward Island estuaries with varying levels of nutrient impact were sampled in August 2020 and again, along with one additional estuary, in June and August 2021. Each estuary was sampled in the inner, middle, and outer regions. Results from multivariate analyses suggest that the inner region is generally distinct from the middle and outer regions at all estuaries. Mummichogs were generally found in higher abundance in the inner region of most estuaries and displayed a strong, positive linear correlation with sea lettuce abundance. Nearshore fish assemblages were more similar between estuaries from the same shoreline (north vs south shore) than between estuaries with similar levels of nutrient impact (defined by eutrophic times). However, the inner region of estuaries with higher levels of nutrient impact were found to also have relatively higher mean mummichog abundance than inner regions of estuaries with lower nutrient impact. Thus, mummichog abundance may offer an indication of eutrophication within the inner region of estuaries. Chapter 4 evaluated whether environmental DNA (eDNA) metabarcoding, could act as a complement or replacement to beach seining. Three stations (inner, middle, and outer estuary) were sampled using eDNA medium collection (1 L water samples) and beach seines across estuaries sampled in the previous data chapter. eDNA metabarcoding detected more fish species than beach seining, including deeper water species like striped bass (Morone saxatilis) and the endangered winter skate (Leucoraja ocellata). eDNA metabarcoding also differentiated stations 0.4-3 km apart and detected the seasonal and interannual shifts in the fish assemblages suggested by beach seining. Most surprising was that the most abundant fish taxa detected by eDNA metabarcoding and beach seining often contributed similar percentages of the total composition. Thus, eDNA metabarcoding has not only the potential to act as a complement to beach seining (i.e., detect additional species/ genera) but could serve as a replacement in the sea lettuce-infested inner regions of eutrophic estuaries. This dissertation’s primary findings, namely that mummichog abundance in the inner estuary may serve as an indicator of eutrophication and eDNA metabarcoding could serve as a complement and replacement for beach seining, may be directly used in assessing estuarine health across the southern Gulf of Saint Lawrence.

Mark Saunders (2022). THE USE OF ENVIRONMENTAL DNA TO CHARACTERIZE FISH ASSEMBLAGES IN TEMPERATE ESTUARIES OF VARYING LEVELS OF NUTRIENT IMPACT. UWSpace. http://hdl.handle.net/10012/19007