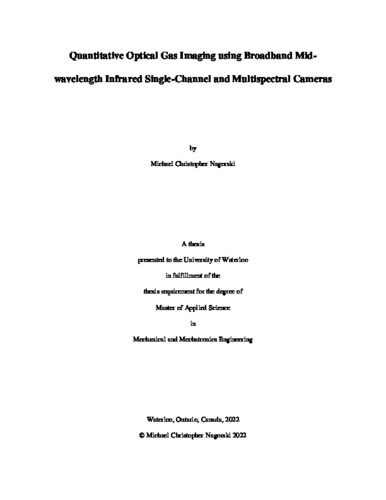 Quantifying and limiting methane emissions from upstream oil and gas is an efficient strategy to reduce anthropogenic climate change and has received considerable attention from regulators in recent years. Quantification technologies are needed to address this problem and quantitative optical gas imaging (QOGI) using broadband mid-wavelength infrared (MWIR) cameras is a promising solution that can provide instantaneous flow rate estimates over large areas and at a distance. Independent research on the accuracy of these QOGI systems in controlled and real-world conditions is needed. Further, single-channel camera systems contain a single bandpass filter which makes their estimates sensitive to uncertain gas temperature. Multispectral broadband MWIR cameras integrate multiple bandpass filters to provide unique spectral information which can be used to infer additional parameters such as the gas temperature. Multispectral OGI cameras have been used to quantify methane path concentrations in literature, but further research is needed to fully demonstrate their QOGI capabilities and assess their accuracy. This thesis seeks to fill these knowledge gaps in broadband MWIR QOGI. A spectroscopic model is developed to obtain column density estimates based on the pixel intensities measured by the camera. The column densities are combined with the apparent velocity of the pixels from an optical flow velocimetry model to yield instantaneous flow rate estimates. The QOGI algorithms are experimentally-validated using a FLIR GF320 single-channel camera, Telops FAST M150 multispectral camera, and controlled release apparatus that releases methane at controlled flow rates and ambient temperature. The algorithms are benchmarked against the FLIR QL320 quantification system which is a commercial tablet-based software that works with the GF320. The cameras and algorithms are tested in the field to evaluate the challenges presented by real-world conditions. A CFD-large eddy simulation of a CH4 and CO2 plume was used with a camera and noise model to generate synthetic images which could be used to validate multispectral QOGI. The accuracy of the column densities obtained using the GF320 are believed to be comparable to those from previous studies and the QL320, but the 15 Hz frame rate was problematic for optical flow velocimetry. The single-channel measurements were extremely sensitive to uncertain gas temperature as expected. The multispectral measurements were contaminated with uncooled filter emission which made radiometrically-accurate measurements of low temperature scenes impossible; optical flow velocimetry was reasonably successful. Using synthetic images generated from simulated data showed that multispectral QOGI is able to infer the gas temperature and multiple species concentrations simultaneously and that the column densities are very accurate. The optical flow velocimetry is typically the main source of error.