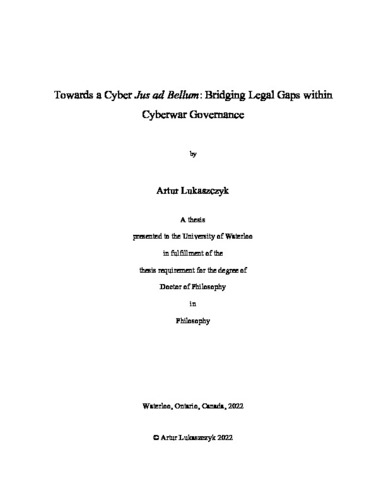 While the capabilities of cyberweapons surge forward, our ability to effectively evaluate and govern their deployment has lagged behind. There are presently no internationally binding laws of cyberwar. In their absence, early efforts towards cyberwar governance have revolved around extending existing laws of armed conflict into cyberspace, in hopes of establishing that such laws remained binding within the cyber domain. Although this approach has proven effective at governing cyber operations resulting in physically destructive harms, the decidedly kinetic lens of this approach limits its ability to evaluate the wider spectrum of cyber operations resulting in unfamiliar harms. The goal of this project is to offer a robust evaluative framework which encompasses not only cyber operations resulting in kinetic-analogous consequences, but also disanalogous cyber operations which nonetheless pose a clear and imminent threat to the security of states. I argue that a flexible moral framework built upon the six jus ad bellum principles of the Just War Theory tradition offers an avenue by which we may formulate a strong conceptual and ethical foundation for the evaluation of a fuller spectrum of cyber operations, as well as develop norms of best practice for state conduct within cyberspace.