Under the Skin: Assessing the Ideological Underpinnings and Material Reality of Cultured Meat 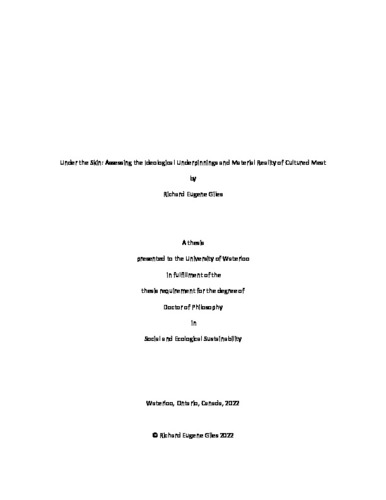 The relationship between industrial animal agriculture, resource depletion, and environmental instability has become increasingly clear in recent years. In keeping with the longstanding focus on consumers, and consumption’s role in mitigating climate issues, a number of potential “resolutions” for this subject area have been promoted, including “local” food and plant-based diets. Cultured meat – the act of growing meat in a laboratory setting – has seen increased attention as a theoretical silver bullet, able to appease both consumer demands and environmental concerns. Recent developments have also presented the general public with the possibility that cultured meat may be a reality in the near future. This dissertation investigates the promises, imagination, and narratives surrounding cultured meat. This work demonstrates that there is a need for caution; multiple aspects of cultured meat require further investigation, debate, and reconciliation before the promises of this sector can be seen as viable. The current state of the cultured meat industry is fraught with conflicting claims, inconsistent and incoherent information, and projections which do not align with ongoing revelations. Academic literature and media discussion also needs to be treated with critical attention; overarching themes in the literature point to an early normalization of cultured meat without a strong evidential basis, and there is a need to acknowledge the under-developed nature of much of the discourse writ large. Furthermore, cultured meat is not often discussed in reference to a systemic context – this dissertation addresses this issue by placing the subject matter in the context of anthroparchy and carnism, two theories related to the natural and animal condition. These theories are utilized to test claims that cultured meat is disruptive, as well as investigate whether cultured meat reinforces ongoing systemic practices, or even expands them in unexpected directions. Such an approach is important in ensuring that cultured meat is contextualized, understood in reference to larger frameworks of material and immaterial matters. This investigation finds that there is considerable reason to be wary of claims that cultured meat is truly “revolutionary.” The dissertation contrasts the current “state of the industry,” as well as the themes seen in ongoing discourse, with long-standing and emerging discourses which have been important in legitimizing cultured meat as a theoretical – and investment-worthy – innovation. Long-standing narratives of cultured meat as a “disruptive” entity are called into question, both in terms of cultured meat’s current developmental status, and in terms of various imagined futures stemming from these narratives. Such narratives are contrasted with claims that cultured meat is simultaneously familiar, a mere continuation of ongoing practices but in newer, more environmentally friendly form. Finally, the dissertation also identifies recent narratives and imagery which, though a small part of the overall discourse, hold massive implications for cultured meat, and larger societal concerns, in both material and immaterial manners. These narratives require critical investigation in tandem with the systemic theories of anthroparchy and carnism. Despite the wide-ranging, theoretical impacts of cultured meat on animal(s), nature, and other elements, the narratives of these impacts often refer to animal and nature in a broad, general sense, if such reference is even made. This dissertation emphatically demonstrates the limitations of current approaches, and makes a clear case that cultured meat should not be treated as an interesting novelty, nor a force of inherent good or liberation, but an entity which necessitates wide-ranging inquiry, regardless of how cultured meat comes to fruition. This dissertation ultimately calls for a more robust discourse and research agenda surrounding cultured meat; a greater sense of caution regarding its prospects; and a stronger reference to the material and immaterial conditions of the animals who will be the subject of cultured meat production.