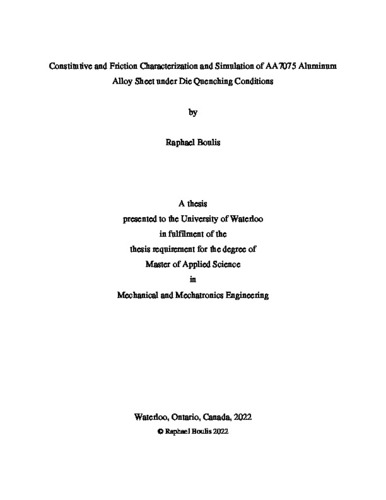 This thesis investigates the die quench forming of AA7075 aluminum alloy sheet, including the constitutive and friction behaviour at elevated temperatures. Experiments examining characterization of friction behaviour and models to simulate sheet forming were developed for conditions corresponding to the die quench thermal process window, comprising solutionizing of the material at 480⁰C, followed by simultaneous forming and quenching in a cooled die. A modified version of the temperature- and rate-dependent Zerilli-Armstrong model [136] was developed and calibrated as part of this work. This model was fit to die quench material characterization data for AA7075 from two sources, due to Omer et al. [54] and Wang et al. [119], designated the Omer-fit and Wang-fit models, respectively. Both models captured the measured constitutive data relatively well, with the worst fit condition for the Omer-fit corresponding to the 470°C, 0.1 s-1 test with an R2 value of 0.7798, whereas the worst case for the Wang-fit was the 400°C, 0.1 s-1 test condition with an R2 value of 0.8992. All other tests conditions exhibited R2 values closer to unity. A numerical model of tensile testing under DQ conditions was developed using the tensile geometry from Wang et al. [119] in conjunction with the Omer-fit to perform a direct comparison between the Omer et al. [54] and Wang et al. [119] material characterization data. The tensile model using the Omer-fit predicted a significantly higher hardening response when compared to experimental measurements by Wang et al. [119]. A numerical model of limiting dome height (LDH) experiments, performed under DQ conditions by George et al. [130], was developed to assess the constitutive models comprising the Omer- and Wang-fits. The Wang-fit demonstrated accurate load-displacement and strain path predictions with slight over-softening at high forming strokes. The Omer-fit model demonstrated significant overprediction of the loads, while having accurate predictions for the strain path at lower displacement. The predicted thermal history and temperature distributions reveal a significant temperature differential within the formed part between the centre of the punch (colder) and the unsupported region (hotter) between the punch and die for the 25.4 mm and 76.2 mm wide specimens. The temperature differential resulted in these specimens localizing within the hotter unsupported region. The 152.4 mm wide specimen also exhibited a temperature differential, making the unsupported region the hottest part of the specimen. However, for this geometry the unsupported region encompasses the full circumference of the punch. This lowers the stress in the unsupported region, forcing strain localization to the punch tip. Under DQ test conditions, an average steady-state coefficient of friction (COF) of 0.02 for the Fuchs Forge Ease AL278 lubricant versus 0.15 for the Boron Nitride was obtained in the Twist Compression Test (TCT). The Renoform 10 [90] experienced early breakdown while the Renoform 25 [117] experienced gradual breakdown for the DQ test conditions. For experiments using tooling pre-heated to 200ºC, all lubricants experienced breakdown in at least two of three repeats, except for the Fuchs AL278, which experienced an average steady state COF of 0.015. The Fuchs AL 278 was tested with DLC coated cups at various tooling temperatures. The addition of the DLC coating was found to increase the COF for room temperature tooling to 0.059, however, at 200 and 300⁰C tooling temperatures the addition of DLC was found to decrease the COF. At a tooling temperature of 350°C, breakdown of the DLC coating starts to occur.