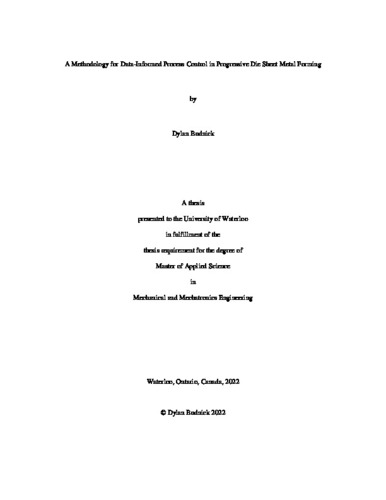 This thesis investigates the coupled relationship between the strip transfer and forming operations in progressive die sheet metal forming, including the effects of the strip layout geometry, and its effect on the process speed and accuracy. Servo-actuated strip lifters and feeder are considered to assist in minimizing the dynamic response of the strip during the transfer process. A methodology is proposed for identifying suitable trajectories to prescribe the motion of active strip lifters and feeder to obtain consistent part quality without risk of process failures for a progressive die operation. Multiple iterations of a finite element (FE) model were constructed in LS-DYNA to simulate a progressive die operation. Various FE analysis techniques were used to reduce the computational cost of the simulations to allow for enough data to be generated for machine learning applications. Both explicit and implicit time-integration schemes were considered in iterations of the FE model. Both single and dual carrier strip layouts were considered. The results of the FE simulations suggest that the single carrier strip layouts produce larger predicted dynamic displacements and rotations of the work-piece as compared to the dual carrier strip layouts during strip transfer. Furthermore, the single carrier strip layout is shown to be susceptible to strip misalignment. The final version of the FE model utilized geometry based on a demonstrator tool being deployed at the Technische Universität München. A total of 1000 simulations were generated, 500 each for the ‘I’ and ‘O’ stretch-web types using a single carrier strip layout. Each simulation considered a unique permutation of control inputs sampled from the set of possible strokes rates and trajectories for the lifters and feeder. Cubic splines were used to generate the trajectories for the strip lifter and feeder by varying the position of two knots used to define the shape of the spline. The results from the 1000 simulations indicate that in general the ‘S’ stretch-web produces a larger variance in the predicted dynamic response and ‘work-piece placement as compared to the ‘I’ stretchweb. Furthermore, the stroke rate and lifter trajectory were shown to have a large influence on the overshooting of the work-pieces during strip transfer and the probability of whether tooling collisions occurred. Multiple machine learning models were trained on the data generated by the final FE model. Two types of classifiers were constructed using neural network and XGBoost architectures. The first classifier predicts whether the clearance between the strip and binder are within a specified tolerance (to prevent collision with the tooling) during strip transfer. The second classifier predicts whether the placement accuracy of the work-piece on the forming die after strip transfer is within a specified tolerance. A range of tolerances were considered when labeling the data for both classifiers. Nestedcross fold validation was used to select the hyperparameter tuning and model selection. The machine learning classifiers were used to test all possible control inputs using a ‘minimum feed clearance’ of 10 mm and a maximum ‘work-piece placement error of 0.11 mm. The maximum stroke rate at which a given pair of lifter and feeder trajectories can operate was identified for all permutations. Five permutations that achieved the highest predicted stroke rate were simulated for an additional five strokes. The classifiers showed a reasonable ability to predict the ‘minimum feed clearance’ and ‘workpiece placement in the extended FE simulations for the selected trajectories, but, was unable to account for the strip misalignment which occurred after several strokes in all simulations. This research successfully demonstrates a methodology for using machine learning models trained on FE simulations to predict process outcomes of a progressive die operation with variable feeder and lifter trajectories. The FE simulations used to train the machine learning models were generated by adopting computationally-effective FE modelling techniques in a single press stroke model. The machine learning models were shown to reasonably predict the process outcomes of novel input permutations in a multi-stroke FE simulation. One of the largest constraints in this research is the FE simulation time which limited the model complexity that could be considered in the training set generation. Furthermore, the demonstration of the machine learning predictions for a multi-stroke process was limited due to the susceptibility of the single carrier strip layout to misalign after strip progression. Future work should consider the use of dual carrier strip layouts for the generation of the training data. Alternative approaches may also be considered, such as a machine learning framework for directly predicting the forward dynamics of the progressive die operation or a co-simulation approach in which a robust controller interacts directly with the FE simulation.