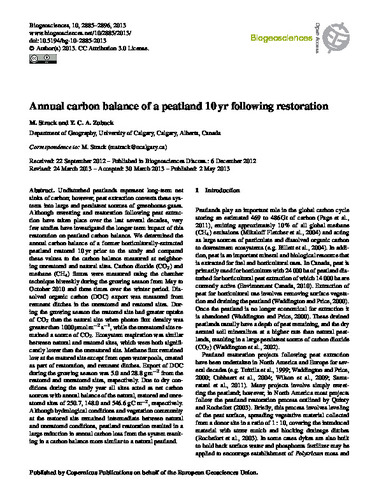 Undisturbed peatlands represent long-term net sinks of carbon; however, peat extraction converts these systems into large and persistent sources of greenhouse gases. Although rewetting and restoration following peat extraction have taken place over the last several decades, very few studies have investigated the longer term impact of this restoration on peatland carbon balance. We determined the annual carbon balance of a former horticulturally-extracted peatland restored 10 yr prior to the study and compared these values to the carbon balance measured at neighboring unrestored and natural sites. Carbon dioxide (CO2) and methane (CH4) fluxes were measured using the chamber technique biweekly during the growing season from May to October 2010 and three times over the winter period. Dissolved organic carbon (DOC) export was measured from remnant ditches in the unrestored and restored sites. During the growing season the restored site had greater uptake of CO2 than the natural site when photon flux density was greater than 1000 µmol m−2 s−1, while the unrestored site remained a source of CO2. Ecosystem respiration was similar between natural and restored sites, which were both significantly lower than the unrestored site. Methane flux remained low at the restored site except from open water pools, created as part of restoration, and remnant ditches. Export of DOC during the growing season was 5.0 and 28.8 g m−2 from the restored and unrestored sites, respectively. Due to dry conditions during the study year all sites acted as net carbon sources with annual balance of the natural, restored and unrestored sites of 250.7, 148.0 and 546.6 g C m−2, respectively. Although hydrological conditions and vegetation community at the restored site remained intermediate between natural and unrestored conditions, peatland restoration resulted in a large reduction in annual carbon loss from the system resulting in a carbon balance more similar to a natural peatland.