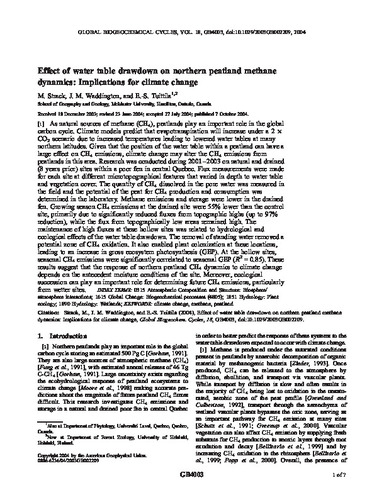 As natural sources of methane (CH4), peatlands play an important role in the global carbon cycle. Climate models predict that evapotranspiration will increase under a 2 x CO2 scenario due to increased temperatures leading to lowered water tables at many northern latitudes. Given that the position of the water table within a peatland can have a large effect on CH4 emissions, climate change may alter the CH4 emissions from peatlands in this area. Research was conducted during 2001–2003 on natural and drained (8 years prior) sites within a poor fen in central Quebec. Flux measurements were made for each site at different microtopographical features that varied in depth to water table and vegetation cover. The quantity of CH4 dissolved in the pore water was measured in the field and the potential of the peat for CH4 production and consumption was determined in the laboratory. Methane emissions and storage were lower in the drained fen. Growing season CH4 emissions at the drained site were 55% lower than the control site, primarily due to significantly reduced fluxes from topographic highs (up to 97% reduction), while the flux from topographically low areas remained high. The maintenance of high fluxes at these hollow sites was related to hydrological and ecological effects of the water table drawdown. The removal of standing water removed a potential zone of CH4 oxidation. It also enabled plant colonization at these locations, leading to an increase in gross ecosystem photosynthesis (GEP). At the hollow sites, seasonal CH4 emissions were significantly correlated to seasonal GEP (R2 = 0.85). These results suggest that the response of northern peatland CH4 dynamics to climate change depends on the antecedent moisture conditions of the site. Moreover, ecological succession can play an important role for determining future CH4 emissions, particularly from wetter sites.