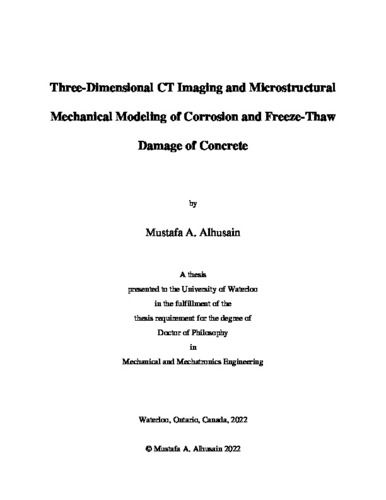 Corrosion and freeze-thaw can cause detrimental damage to concrete structures. Understanding concrete damage mechanisms at the micro-level can play an essential role in implementing effective preventive measures and efficient repair methods. Among various non-destructive testing technologies, high-resolution micro-computed tomography (µCT) imaging has been gaining popularity due to its ability to provide three-dimensional (3D) reconstructions of concrete’s internal structure and analyze its damage mechanisms. Despite its unique capabilities, the full potential of using CT imaging to investigate the general microscale damage of concrete has yet to be realized. Also, limited research has been conducted to investigate the 3D microstructural concrete damage caused by corrosion and freeze-thaw conditions. Therefore, the main objective of this research is to attain a better understanding of the effects of concrete composition and surrounding environments on the severity and mechanisms of corrosion and freeze-thaw damage. This objective was complimented by integrating mechanical characterization using CT imaging into image-based microstructural finite element (FE) modeling. Furthermore, the full potential of CT imaging was examined by investigating the accuracy of corrosion detection using an unprecedentedly large naturally corroded concrete element. The effects of mixture proportions on the mechanisms of corrosion and freeze-thaw damage were examined by investigating internal structures of concrete, such as pore characteristics. The specimens were imaged before being subjected to corrosion and freeze-thaw conditions to determine the impact of concrete composition on its pore properties, after which the corrosion specimens were exposed to 120 wet-dry cycles in salt water with a concentration of 3.5%, whereas the freeze-thaw samples were subjected to 40 cycles. The pore properties were analyzed before and after testing, and the concrete damage mechanisms were investigated. Also, the full potential of CT imaging was examined by investigating the corrosion of a 50-year-old naturally corroded concrete element that is 12 cm wide, 6 cm thick, and 17 cm high. The detected corrosion products were compared to the corrosion of the actual concrete specimen to investigate the accuracy of corrosion detection. A method for improving corrosion detection accuracy was proposed and tested. Moreover, the damage mechanisms were determined by analyzing the pore structure of the concrete element. The effects of the surrounding environment on the severity and mechanisms of freeze-thaw damage were investigated by subjecting concrete specimens of the same composition to 80 freeze-thaw cycles in distinct sulfate environments with different concentrations. The mass loss data and pore characteristics, including porosity, pore size, and pore accessibility, were analyzed throughout the applied cycles to determine the impact of the sulfate salt and concentration on the severity of frost damage. On the other hand, freeze-thaw damage mechanisms under the different sulfate environments were investigated using 3D reconstructions of concrete’s pore microstructure. Also, novel image-based microstructural FE models were developed to investigate concrete damage under corrosion and freeze-thaw conditions. Three-dimensional reconstructions of the FE elements, including the aggregates, air pores, and cement mortar, were created by thresholding and stacking the CT images. The corrosion FE model was modeled by subjecting the steel reinforcement to experiment-based uniform corrosion. On the other hand, the freeze-thaw FE models were simulated by filling the air pores with freezing water and applying the temperatures of the actual freeze-thaw cycles. The interaction between the different elements was examined by studying the internal stress distribution throughout the applied corrosion and freeze-thaw conditions. Also, the accuracy of the FE models was investigated by comparing the severity and mechanisms of the FE models to the CT data of the actual concrete specimens.