Triangular Epistolary Diplomacy with Rome from Judas Maccabee to Aristobulos I 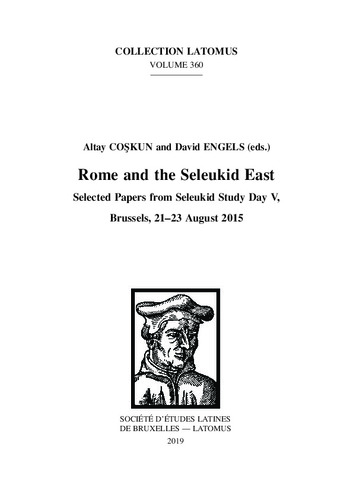 Scholarly opinions tend to converge towards accepting that Roman commitment to Judaea was very limited: sources attesting treaties of friendship and alliance are either seen as fabricated or not reflecting the real intentions of the Romans. Their inactivity is thus mostly blamed for the discontinuation of friendship by the end of the 2nd century BC. The present study questions these views, not least by demonstrating how highly amcitia populi Romani was appreciated both by the Author (140 BC) and Continuator (128 BC) of 1Macc. The methodological novelty is to accept the historicity of the diplomatic documents in 1Macc and Josephus’ Jewish Antiquities, and to systematically correct their narratives on this basis. Accordingly, Judas’ ambassadors made the first alliance (161 BC), which was renewed under Simon (142 BC) and again under John Hyrkanos I (128 BC). Another mission to Rome under John Hyrkanos was headed by Straton (107 BC). The alliance was also renewed under Aristobulos (104 BC) and Alexander Jannaios (by 100 BC). The evidence allows us to describe the mechanism of Judaean diplomacy: ambassadors were sent from Jerusalem to the Senate, put forward their concerns, expected and normally received official letters that told third parties, especially Seleukid kings, what to do. This kind of ‘triangular diplomacy’ was particularly successful under Simon and John Hyrkanos. Gradually, however, the largescale changes in the eastern Mediterranean World diminished Roman interest and influence in the Near East, also ending the high tide of Roman epistolary diplomacy.