Seedlings of Temperate Tree Species Show Plastic Responses to Water Deficit and Heat Stress, But They Do Not Prevent Decline in Growth 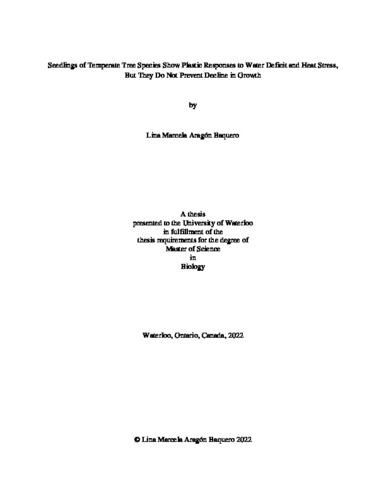 Species response to climate change is difficult to predict because warming involves the interaction of multiple stressors whose effects are simultaneous and therefore difficult to disentangle. To address this gap, I studied the effect of global warming on plant performance and functional traits by exposing seedlings from five temperate tree species with distinct life histories to water deficit and heat individually and combined. I evaluated for each species: 1) the performance response and 2) multivariate phenotypic plastic response to water deficit and heat individually and combined, and 3) how functional traits mediate the tree’s performance response to those stresses. In a greenhouse, 180 individuals grown in pots from Acer saccharum, Betula alleghaniensis, Quercus rubra, Picea glauca, and Pinus resinosa were exposed to six treatments using a fully crossed factorial design with three water deficit levels (low: 38.2%, medium: 35.7%, and high: 31.3%) and two temperatures (ambient temperature and warmer temperature: +0.42°C). To have a holistic understanding of the species response, I studied a total of 33 functional traits from the leaf (26), stem (2), and roots (5) related to various vital ecophysiological functions. We found that future warmer and drier conditions will decrease plant performance and impact different species differently. The seedlings' performance response was stronger to water deficit than heat, while their plastic trait response was stronger to heat than water deficit. These results highlight that performance and phenotypic responses can be sensitive to different environmental factors. Further, in each species, different traits responded to these two environmental stressors, indicating that the effects of global warming on the phenotype will differ among species. Although heat will lead to water deficit via increased evaporation, results showed that heat and water deficit in all species impact different sets of functional traits. Phenotypic response to global warming sits at the intersection of these two responses, making them more complex to assess. Last, only a total of five traits from three different species contributed to maintaining plant performance under water deficit conditions. Still, performance drastically declined in these species, indicating that those plastic responses were insufficient to offset the effect of stressful environmental conditions.