Front-of-Pack Labelling in the Caribbean Community: Power and Policy in Regional Standard Setting 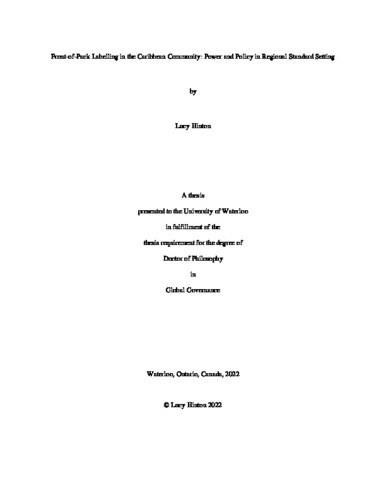 The Caribbean Community (CARICOM) identified FOP labelling as a promising policy tool to slow the region’s growing rates of diet-related non-communicable diseases (NCDs). These diseases are associated with the region’s high levels of importation of processed and ultra-processed foods. FOP labels aim to curb the sales and consumption of such foods. Despite emanating from directly within CARICOM’s regional governance architecture for health and progressing through CARICOM’s regional structures for implementing policy, CARICOM failed to adopt a regional and uniform FOP label. This thesis asks why this was the case. Using a combination of policy document analysis and participant interviews, this thesis examines the role and power of different actor groups in developing the policy and their efforts to implement it. It finds several reasons for CARICOM’s failure to adopt a regionally standardized FOP label. First, FOP labelling policy was moved from the realm of public health governance in CARICOM to a regional standard-setting venue to be adopted by individual states. The origins of FOP labelling as a regional public health policy were obscured when it was moved into the regional standard-setting process for implementation. Second, the process of standard setting privileged corporate interests and those with existing knowledge of the process, which meant that industry actors were able to successfully delay, weaken, and circumvent the policy’s adoption and implementation. Ultimately, the aim of FOP labelling, as a health policy instrument, is to curb consumption (and therefore sales) of highly processed foods. This goal put it at odds with the commercial interests of most of the corporate actors who were frequent food labelling standards participants at multiple levels of governance. Because most standard-setting organizations and processes are situated within the international trade regime, where industry actors have more knowledge around the processes, culture, and norms of operating, these actors successfully reframed FOP labelling as anti-trade, ignoring the public health rationale and the policy’s origins as part of the regional political agenda. At the same time, public health actors lacked the authority and the power inside the standard-setting venue to ensure the passage of the policy. The thesis draws lessons from the CARICOM FOP labelling case that can help inform the ways that food systems policies are developed, adopted, and implemented. First, and most importantly, the choice of process matters. Actors who originally had agenda-setting power cannot or do not always maintain authority and power. Second, those with knowledge around the processes, culture and norms of the chosen venue will have a strategic advantage in their approach to resistance. Third, regional governance provides an especially challenging setting for implementing policies that conflict with commercial interests, since more intervention points become more accessible to corporate resistance. The thesis finds that when a food systems policy is contingent on the consensus of actors in different communities, the actors’ familiarity with the process and overarching regime can have a major impact on the ways that power is operationalized and ultimately, the success of the policy’s adoption and implementation.