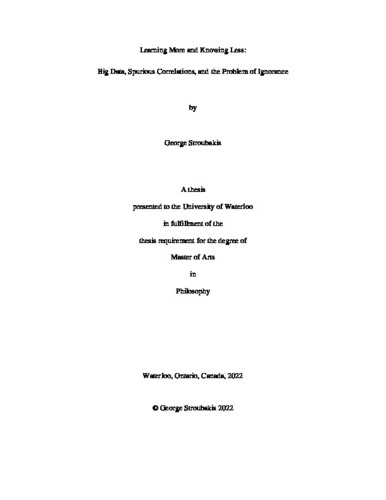 There are few things we can name that surpass big data’s boon for our empirical endeavours. Big data promises an ever-growing source of data that could be readily accessed by researchers in virtually any field of study. Data, as we know, are the rudiments of our knowledge claims about the world. Big data multiplied the number of data collected and stored to unfathomable numbers. But it is well known that our tools that help us sort through the datasets bring up spurious correlations. This project explores the implications of spurious correlations on our epistemic endeavours through the lens of ignorance. I will draw on recent scholarship in agnotology, the study of ignorance, namely by Nancy Tuana, Robert Proctor, and Nicholas Rescher. I will argue that spurious correlations, especially those that are less obvious to the epistemic agent can mislead the latter in forging false beliefs. In effect, big data, through the presence of spurious correlations can create ignorance. I will also argue that the epistemic agent shares in the responsibility of promoting and disseminating the ignorance that can arise from too much data. The promise of big data to provide the building blocks upon which only knowledge can stand is mistaken, for it also provides the building blocks for a new type of ignorance that is not an absence of knowledge, but the presence of something masquerading as it.