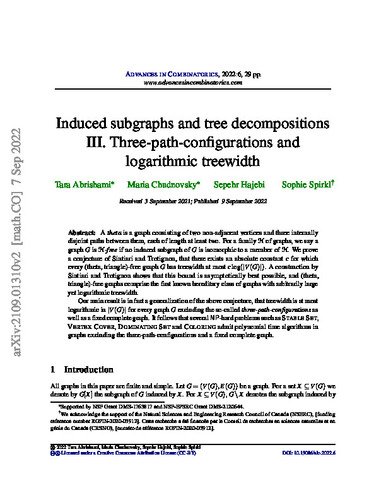 A theta is a graph consisting of two non-adjacent vertices and three internally disjoint paths between them, each of length at least two. For a family H of graphs, we say a graph G is H-free if no induced subgraph of G is isomorphic to a member of H. We prove a conjecture of Sintiari and Trotignon, that there exists an absolute constant c for which every (theta, triangle)-free graph G has treewidth at most c log(jV(G)j). A construction by Sintiari and Trotignon shows that this bound is asymptotically best possible, and (theta, triangle)-free graphs comprise the first known hereditary class of graphs with arbitrarily large yet logarithmic treewidth. Our main result is in fact a generalization of the above conjecture, that treewidth is at most logarithmic in jV(G)j for every graph G excluding the so-called three-path-configurations as well as a fixed complete graph. It follows that several NP-hard problems such as STABLE SET, VERTEX COVER, DOMINATING SET and COLORING admit polynomial time algorithms in graphs excluding the three-path-configurations and a fixed complete graph.