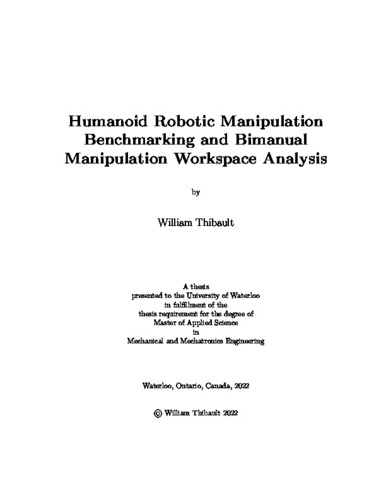 The growing adoption of robots for new applications has led to the use of robots in human environments for human-like tasks, applications well-suited to humanoid robots as they are designed to move like a human and operate in similar environments. However, a user must decide which robot and control algorithm is best suited to the task, motivating the need for standardized performance comparison through benchmarking. Typical humanoid robotic scenarios in many household and industrial tasks involve manipulation of objects with two hands, bimanual manipulation. Understanding how these can be performed in the humanoid’s workspace is especially challenging due to the highly constrained nature due to grasp and stability requirements, but very important for introducing humanoid robots into human environments for human-like tasks. The first topic this thesis focuses on is benchmarking manipulation for humanoid robotics. The evaluation of humanoid manipulation can be considered for whole-body manipulation, manipulation while standing and remaining balanced, or loco-manipulation, taking steps during manipulation. As part of the EUROBENCH project, which aims to develop a unified benchmarking framework for robotic systems performing locomotion tasks, benchmarks for whole-body manipulation and loco-manipulation are proposed consisting of standardized test beds, comprehensive experimental protocols, and insightful key performance indicators. For each of these benchmarks, partial initial benchmarks are performed to begin evaluating the difference in performance of the University of Waterloo’s REEM- C, “Seven”, using two different motion generation and control strategies. These partial benchmarks showed trade-offs in speed and efficiency for placement accuracy. The second topic of interest is bimanual manipulation workspace analysis of humanoid robots. To evaluate the ability of a humanoid robot to bimanually manipulate a box while remaining balanced, a new metric for combined manipulability-stability is developed based on the volume of the manipulability ellipsoid and the distance of the capture point from the edge of the support polygon. Using this metric, visualizations of the workspace are performed for the following scenarios: when the center of mass of the humanoid has a velocity, manipulating objects of different size and mass, and manipulating objects using various grips. To examine bimanual manipulation with different fixed grasps the manipulation of two different boxes, a broom and a rolling pin are visualized to see how grip affects the feasibility and manipulability-stability quality of a task. Visualizations of REEM-C and TALOS are also performed for a general workspace and a box manipulation task to compare their workspaces as they have different kinematic structures. These visualizations provide a better understanding of how manipulability and stability are impacted in a bimanual manipulation scenario.