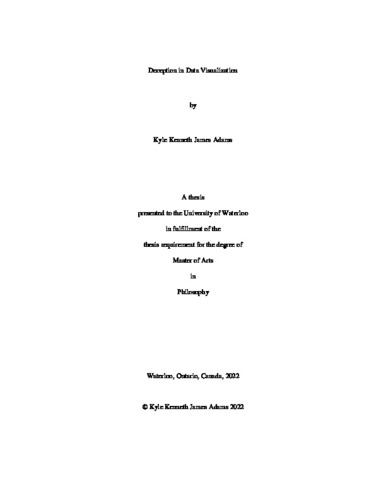 In recent years, there has been a great deal of public discussion of misleading graphs and statistics, but this phenomenon seems to have fallen outside the scope of philosophical analysis. The philosophy of language has produced many well-developed accounts of lying with words, but so far, has not given much attention to deception with data visualizations. This thesis is a first step towards filling that gap. I consider several existing accounts which might be expected to handle cases of lying and misleading in data visualizations, and I argue that none of them do an adequate job of analyzing these kinds of lies. The first account that I consider is from Edward R. Tufte’s The Visual Display of Quantitative Information, wherein he describes principles for integrity in data visualizations. I argue that these principles do not constitute an adequate account of deception in data visualization, because they do not reflect the widely recognized lying-misleading distinction, and also his prescriptions are too vague to constitute an effective definition. I also consider accounts of lying and deception from philosophy of language, from Thomas Carson, Jennifer Saul, and Andreas Stokke. Each of these three accounts also falls short of adequately addressing lying and misleading in data visualization. In analyzing why this is, the question of what is said by a graph becomes crucial, and ultimately, turns out to be an extremely difficult question to answer. There are several confounding factors in trying to understand what is said by a graph, and therefore when it lies. The most important, I suggest, is that what is said by a graph is massively pluralistic—each contains many utterances that it can be thought of as saying. Although Stokke’s account allows for flexible contextual supplementation in response to the structure of the discourse in which the utterances take place, and therefore seems to stand the best chance of addressing this issue, it does not allow for the sort of true pluralism that is necessary here. Ultimately, I conclude that none of the existing literature is suited to handling this problem.