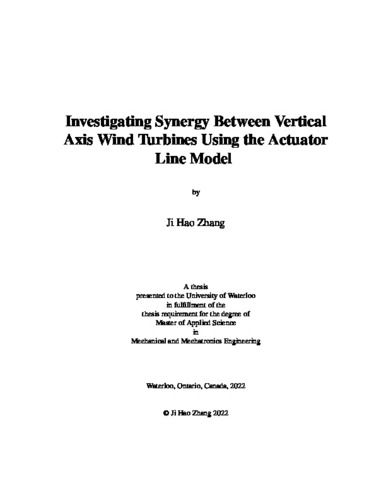 In the past decade, numerous studies have confirmed the presence of beneficial, power-enhancing effects in the interactions of multiple vertical axis wind turbines (VAWTs). This effect is especially important for the advancement of VAWT technology in the area of farm layout arrangement because the ability to augment power in tightly packed arrays is inconceivable for the widely adopted horizontal axis wind turbines. This thesis explores the application of a reduced-order, fast simulation technique called the Actuator Line Model (ALM) towards the simulation of 2- and 3-turbine clusters in an effort to understand VAWT “synergy” and whether ALM is capable of predicting it. Due to the relative inaccessibility of ALM simulation codes (it is not a standard feature of CFD tools), this thesis describes in detail the development process and source code of an implementation using ANSYS Fluent User-Defined Functions. The current development draws from methodologies aggregated and distilled from key literature in this field, and has been found to be reasonably valid by cross-comparison with an open-source code, prior results in literature, a full-order CFD simulation, and experimental results. An open-source ALM code for OpenFOAM (published and used in peer-reviewed articles) has been used to simulate 2-/3-turbine cluster configurations, demonstrating that ALM is fundamentally capable of predicting turbine synergy. Additionally, useful functional relationships between the configuration parameters and the power ratio (power coefficient of clustered turbines relative to isolated turbines) are identified, confirming and expanding on the findings of literature in this field. Notable patterns include higher performance enhancements experienced by the downwind turbines, power degradation of upwind turbines due to blockage, and correlation of higher downwind turbine synergy with positioning within high velocity zones bordering the wake of the upwind turbine. The V, Reverse V, and Line 3-turbine configuration shapes are demonstrated to be successful synergy-exploiting designs, where the former two, which feature horizontally flipped arrangements, produce the same array power synergy and performance. This thesis also proposes a novel pairwise superimposition scheme to approximate the power ratios of turbines in a 3-turbine configuration using a simple summation of pairwise interactions involving the same relative positions. This scheme was determined to be highly accurate in the current cases, with sub-1% errors, though the general extensibility to higher turbine counts remains to be determined. The current work concludes by summarizing the key findings and offering a set of objectives that could be undertaken by future work in order to validate and improve ALM for the purpose of general VAWT micro-siting.