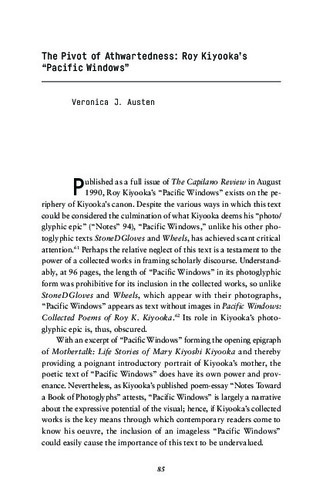 Published as a full issue of The Capilano Review in August 1990, Roy Kiyooka’s “Pacific Windows” exists on the periphery of Kiyooka’s canon. Despite the various ways in which this text could be considered the culmination of what Kiyooka deems his “photo/glyphic epic” (“Notes” 94), “Pacific Windows,” unlike his other photoglyphic texts StoneDGloves and Wheels, has achieved scant critical attention. Perhaps the relative neglect of this text is a testament to the power of a collected works in framing scholarly discourse. Understandably, at 96 pages, the length of “Pacific Windows” in its photoglyphic form was prohibitive for its inclusion in the collected works, so unlike StoneDGloves and Wheels, which appear with their photographs, “Pacific Windows” appears as text without images in Pacific Windows: Collected Poems of Roy K. Kiyooka. Its role in Kiyooka’s photoglyphic epic is, thus, obscured.