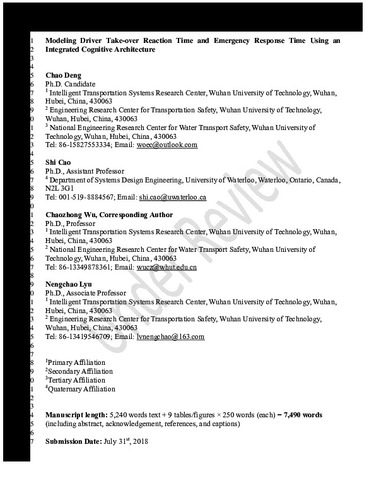 Drivers’ take-over reaction time in partially automated vehicles is a fundamental component of automated vehicle design requirements, and take-over reaction time is affected by many factors such as distraction and drivers’ secondary tasks. This study built cognitive architecture models to simulate drivers’ take-over reaction time in different secondary task conditions. Models were built using the queueing network-adaptive control of thought rational (QN-ACTR) cognitive architecture. Drivers’ task-specific skills and knowledge were programmed as production rules. A driving simulator program was connected to the models to produce prediction of reaction time. Model results were compared with human results in both single-task and multi-task conditions. The models were built without adjusting any parameter to fit the human data. The models could produce simulation results of take-over reaction time similar to the human results in take-over conditions with visual or auditory concurrent tasks, as well as emergency response time in a manual driving condition. Overall, R square was 0.96, root mean square error (RMSE) was 0.5 s, and mean absolute percentage error (MAPE) was 9%. The models could produce simulation results of reaction time similar to the human results from different task conditions. The production rules are plausible representations of drivers’ strategies and skills. The models provide a useful tool for the evaluation of take-over alert design and the prediction of driver performance. Autonomous vehicles with increasing levels of automation will allow drivers to delegate longitudinal and lateral control to the vehicle and also allow drivers to take their eyes off the road and engage in activities unrelated to driving (1). A medium level of automation is called Level 3 automation (SAE 3), where a driver is allowed to engage in non-driving related tasks but is still needed as a fallback level in case of system limits or failures (1). At this level of automation, drivers must resume manual driving in conditions not yet supported by automation. The transition between automation and manual driving can be initiated by the driver, while in some cases automation can also take the initiative and request the driver to take over control (2). Such requests are called take-over requests (TOR). Since self-driving cars are still not perfectly reliable, manual control is still needed as the fallback plan (3). From the cognitive perspective, drivers’ cognitive resources are limited (4), and task switching takes time. Knowledge about human performance in TOR scenarios is essential to the design of fallback procedures dealing with automation limitations and failure. During the take-over process, the time budget refers to the time duration available for drivers to perceive the scenario, regain situation awareness, make decision, and execute responses (5). The take-over process has been extensively analyzed in relation to reaction times. In particular, intervention time refers to the duration from the TOR warning to the moment when a driver’s first effectiveness steering or brake/throttle action is observed (6–10). Intervention time is an important index to measure driver performance in TOR tasks, and faster intervention time is considered better and safer. In autonomous vehicles, drivers are likely to be involved in non-driving tasks such as conversation or surfing the Internet (11, 12). It has been found that non-driving tasks (both visual and auditory) affect driver performance of take-over in automated driving (5, 6, 13). Engagement in non-driving related tasks before TOR can impair the driver’s performance in TOR situations. Different non-driving tasks may have different levels of impact. It is important to investigate the influence of different non-driving related tasks on driver reaction time in TOR situations.