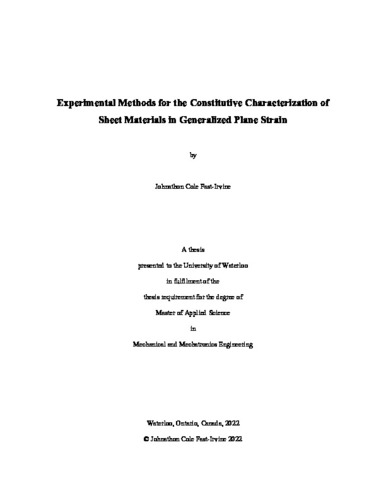 Decreasing vehicle weight by substituting traditional steel for high-strength steel or aluminum is an effective way to improve fuel economy and decrease greenhouse gas emissions in the transportation sector. The optimization of a lightweight vehicle structure and subsequent prediction of forming operations and crash performance of its components requires accurate material models that capture the anisotropic response of sheet metals in a diversity of loading conditions, particularly in generalized plane strain. The objective of this work is to develop and validate two novel experimental methodologies to extract the constitutive response from sheet materials under two generalized plane strain stress states: plane strain tension and through-thickness shear. Plane strain tension is one of the most prominent failure conditions in formed parts, but determination of the plane strain yield strength is complicated. Although plane strain notch experiments are simple to perform, their analysis is not straightforward since the load distribution along the sample gauge width transitions from plane strain tension in the middle to uniaxial tension at each edge. Existing analysis techniques are unreliable due to the assumption of a yield function in the inverse-identification of correction factors or the use of empirical techniques that lack a theoretical foundation. A review of the experimental literature on cruciform tests suggests that a principal in-plane stress ratio of 0.5 applies at plane strain tension for aluminum and steel, independent of isotropy and consistent with the theory of pressure-independent plasticity. With the stress ratio at plane strain tension known along with the tensile R-value, the uniaxial-to-plane strain arc of an isotropic yield surface can be controlled by a single parameter – the yield exponent. The optimal value of the exponent occurs when the modelled stress response, from the integration of optical strain measurements across the gauge region of a plane strain notch specimen, agrees with the experimentally measured stress-strain curve. Multivariable optimization may be used to model differential hardening, by assuming a distribution of the exponent with plastic strain, or non-associated flow, by calibrating two independent exponents for the yield function and plastic potential. Four disparate automotive materials were selected to demonstrate the plane strain notch test integration methodology: AA6xxx-T4 (1.5 mm thick), AA6xxx-T81 (2.7 mm thick), AA5182-O (1.5 mm thick) and DP1180 (1 mm thick). Dual phase steels and high strength aluminum alloys tend to exhibit so-called shear fracture, evidenced by through-thickness cracking at an approximate angle of 45°. Due to the difficulty in obtaining reliable experimental data for sheet metals, the through-thickness shear stress is often left uncalibrated in yield surfaces leading to the inability of the analyst to accurately predict and avoid shear fracture in forming operations. A through-thickness shear test was developed by machining two shear-promoting notches through the sheet thickness of each test specimen and designing a test fixture to minimize gauge region rotation as each specimen was pulled by a standard uniaxial test frame. Experimental tests were completed using AA6xxx-T81 and DP1180 steel to analyze a representative steel and aluminum in different sheet thicknesses. The measured load was corrected for the friction introduced by the test fixture, using a modified strip draw test conducted under analogous conditions as the through-thickness shear test. Normalized shear stress ratios of 0.50 for the AA6xxx-T81 and 0.68 for the DP1180, were identified for input into three-dimensional yield criteria. To describe yielding of a material under all stress states and orientations, a so-called master yield surface was calibrated to the experimental data. Despite the prevalence of plane strain and through-thickness shear induced failures in industry, conventional yield surfaces used for formability models are usually calibrated with the uniaxial tensile stresses, uniaxial tensile R-values (representing the strain directions) and the equal-biaxial stress and R-value. In this analysis, Yld2000, Yld2004 and Vegter master yield surfaces were calibrated to capture the complete material response in all tested loading conditions for each of the four studied materials. The addition of the plane strain tensile and through-thickness shear yield stresses improved the accuracy of the models compared to the conventional calibration. Optimal agreement with the experimental data was obtained by adopting a variable yield function exponent, rather than relying on conventional values of 6 for BCC and 8 for FCC materials. Each of the master yield surface models was evaluated by comparing the simulated responses of plane strain and through-thickness shear tests to experimental data. By leveraging knowledge of the yield surface and the hardening behavior to large strains obtained from shear tests, the stress-strain response of a plane strain notch geometry was accurately simulated beyond necking up to fracture for AA5182 and DP1180. The plane strain notch geometry was different than the geometry used for experimental evaluation of the plane strain yield strength. Small differences between the simulated and experimental stress-strain and localized major strain evolution for AA6xxx-T4 and AA6xxx-T81 were attributed to post-uniform differential hardening. Simulating the AA6xxx-T81 through-thickness shear test using the calibrated Yld2004 model confirmed excellent agreement with the experimental load displacement response.