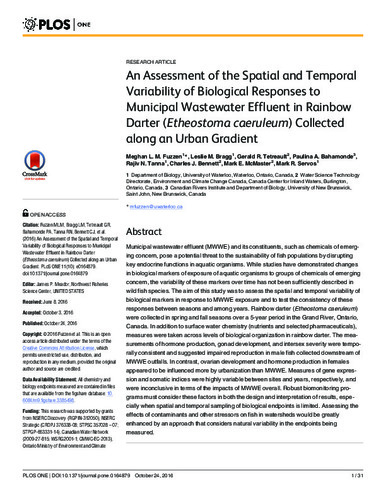 An Assessment of the Spatial and Temporal Variability of Biological Responses to Municipal Wastewater Effluent in Rainbow Darter.pdf (3.601Mb)

Municipal wastewater effluent (MWWE) and its constituents, such as chemicals of emerging concern, pose a potential threat to the sustainability of fish populations by disrupting key endocrine functions in aquatic organisms. While studies have demonstrated changes in biological markers of exposure of aquatic organisms to groups of chemicals of emerging concern, the variability of these markers over time has not been sufficiently described in wild fish species. The aim of this study was to assess the spatial and temporal variability of biological markers in response to MWWE exposure and to test the consistency of these responses between seasons and among years. Rainbow darter (Etheostoma caeruleum) were collected in spring and fall seasons over a 5-year period in the Grand River, Ontario, Canada. In addition to surface water chemistry (nutrients and selected pharmaceuticals), measures were taken across levels of biological organization in rainbow darter. The measurements of hormone production, gonad development, and intersex severity were temporally consistent and suggested impaired reproduction in male fish collected downstream of MWWE outfalls. In contrast, ovarian development and hormone production in females appeared to be influenced more by urbanization than MWWE. Measures of gene expression and somatic indices were highly variable between sites and years, respectively, and were inconclusive in terms of the impacts of MWWE overall. Robust biomonitoring programs must consider these factors in both the design and interpretation of results, especially when spatial and temporal sampling of biological endpoints is limited. Assessing the effects of contaminants and other stressors on fish in watersheds would be greatly enhanced by an approach that considers natural variability in the endpoints being measured.