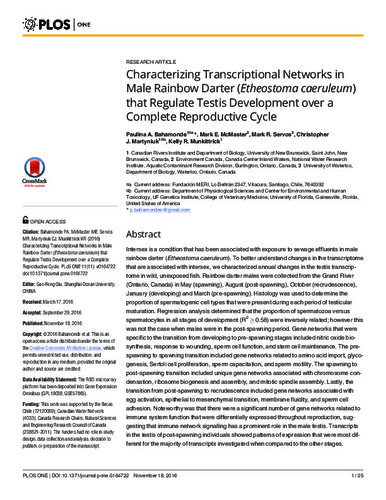 Intersex is a condition that has been associated with exposure to sewage effluents in male rainbow darter (Etheostoma caeruleum). To better understand changes in the transcriptome that are associated with intersex, we characterized annual changes in the testis transcriptome in wild, unexposed fish. Rainbow darter males were collected from the Grand River (Ontario, Canada) in May (spawning), August (post-spawning), October (recrudescence), January (developing) and March (pre-spawning). Histology was used to determine the proportion of spermatogenic cell types that were present during each period of testicular maturation. Regression analysis determined that the proportion of spermatozoa versus spermatocytes in all stages of development (R2 ≥ 0.58) were inversely related; however this was not the case when males were in the post-spawning period. Gene networks that were specific to the transition from developing to pre-spawning stages included nitric oxide biosynthesis, response to wounding, sperm cell function, and stem cell maintenance. The pre-spawning to spawning transition included gene networks related to amino acid import, glycogenesis, Sertoli cell proliferation, sperm capacitation, and sperm motility. The spawning to post-spawning transition included unique gene networks associated with chromosome condensation, ribosome biogenesis and assembly, and mitotic spindle assembly. Lastly, the transition from post-spawning to recrudescence included gene networks associated with egg activation, epithelial to mesenchymal transition, membrane fluidity, and sperm cell adhesion. Noteworthy was that there were a significant number of gene networks related to immune system function that were differentially expressed throughout reproduction, suggesting that immune network signalling has a prominent role in the male testis. Transcripts in the testis of post-spawning individuals showed patterns of expression that were most different for the majority of transcripts investigated when compared to the other stages. Interestingly, many transcripts associated with female sex differentiation (i.e. esr1, sox9, cdca8 and survivin) were significantly higher in the testis during the post-spawning season compared to other testis stages. At post-spawning, there were higher levels of estrogen and androgen receptors (esr1, esr2, ar) in the testis, while there was a decrease in the levels of sperm associated antigen 1 (spag1) and spermatogenesis associated 4 (spata4) mRNA. Cyp17a was more abundant in the testis of fish in the pre-spawning, spawning, and post-spawning seasons compared to those individuals that were recrudescent while aromatase (cyp19a) did not vary in expression over the year. This study identifies cell process related to testis development in a seasonally spawning species and improves our understanding regarding the molecular signaling events that underlie testicular growth. This is significant because, while there are a number of studies characterizing molecular pathways in the ovary, there are comparatively less describing transcriptomic patterns in the testis in wild fish.