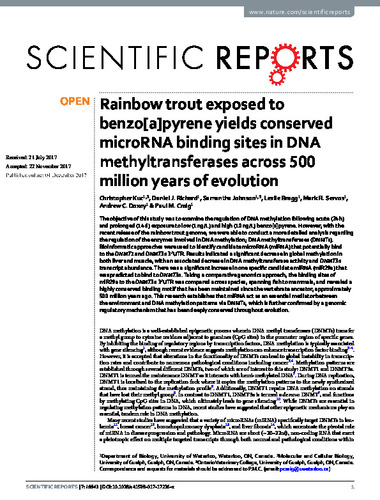 The objective of this study was to examine the regulation of DNA methylation following acute (24 h) and prolonged (14 d) exposure to low (1 ng/L) and high (10 ng/L) benzo[a]pyrene. However, with the recent release of the rainbow trout genome, we were able to conduct a more detailed analysis regarding the regulation of the enzymes involved in DNA methylation; DNA methyltransferases (DNMTs). Bioinformatic approaches were used to identify candidate microRNA (miRNA) that potentially bind to the DNMT1 and DNMT3a 3′UTR. Results indicated a significant decrease in global methylation in both liver and muscle, with an associated decrease in DNA methyltransferase activity and DNMT3a transcript abundance. There was a significant increase in one specific candidate miRNA (miR29a) that was predicted to bind to DNMT3a. Taking a comparative genomics approach, the binding sites of miR29a to the DNMT3a 3′UTR was compared across species, spanning fish to mammals, and revealed a highly conserved binding motif that has been maintained since the vertebrate ancestor, approximately 500 million years ago. This research establishes that miRNA act as an essential mediator between the environment and DNA methylation patterns via DNMTs, which is further confirmed by a genomic regulatory mechanism that has been deeply conserved throughout evolution.