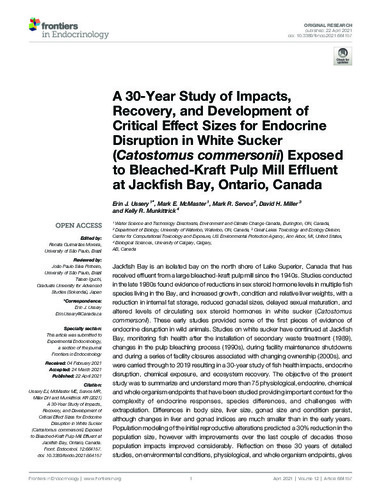 Jackfish Bay is an isolated bay on the north shore of Lake Superior, Canada that has received effluent from a large bleached-kraft pulp mill since the 1940s. Studies conducted in the late 1980s found evidence of reductions in sex steroid hormone levels in multiple fish species living in the Bay, and increased growth, condition and relative liver weights, with a reduction in internal fat storage, reduced gonadal sizes, delayed sexual maturation, and altered levels of circulating sex steroid hormones in white sucker (Catostomus commersonii). These early studies provided some of the first pieces of evidence of endocrine disruption in wild animals. Studies on white sucker have continued at Jackfish Bay, monitoring fish health after the installation of secondary waste treatment (1989), changes in the pulp bleaching process (1990s), during facility maintenance shutdowns and during a series of facility closures associated with changing ownership (2000s), and were carried through to 2019 resulting in a 30-year study of fish health impacts, endocrine disruption, chemical exposure, and ecosystem recovery. The objective of the present study was to summarize and understand more than 75 physiological, endocrine, chemical and whole organism endpoints that have been studied providing important context for the complexity of endocrine responses, species differences, and challenges with extrapolation. Differences in body size, liver size, gonad size and condition persist, although changes in liver and gonad indices are much smaller than in the early years. Population modeling of the initial reproductive alterations predicted a 30% reduction in the population size, however with improvements over the last couple of decades those population impacts improved considerably. Reflection on these 30 years of detailed studies, on environmental conditions, physiological, and whole organism endpoints, gives insight into the complexity of endocrine responses to environmental change and mitigation.