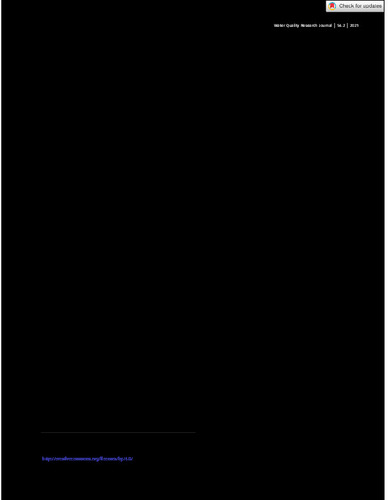 Effluents from municipal wastewater treatment plants (MWTPs) are complex mixtures of chemicals including endocrine-disrupting compounds (EDCs) and 17α-ethynylestradiol (EE2). The objective of this study was to evaluate selected responses of two fish species, in two different years, exposed in situ to MWTP effluent. Biological markers of exposure (plasma vitellogenin (VTG) and antioxidant enzymes) were measured in two species of male fish, rainbow trout (Oncorhynchus mykiss) and fathead minnow (Pimephales promelas), caged at sites associated with wastewater outfall. The estrogenicity of the final effluent in 2010 was determined to be 17.0 + 0.4 ng/L estrogen equivalents (EEQ) and reduced to 7.5 + 2.9 ng/L EEQ after infrastructure upgrades. Pharmaceuticals and personal care products in the effluent and surface water in both years confirmed the exposures at each downstream site. Despite the presence of estrogenic compounds in the MWTP effluent, no effluent-caged male fish demonstrated plasma VTG induction. Minnows and trout that received an intraperitoneal injection of 5 mg/g EE2 showed VTG induction at both field sites. In 2012, the liver somatic index (LSI) of both species increased with exposure, as did changes in antioxidant enzymes, and reactive oxygen species (ROS) activity. Multiple biological mechanisms are modified by effluent exposure, and multiple endpoints are needed to assess risk.