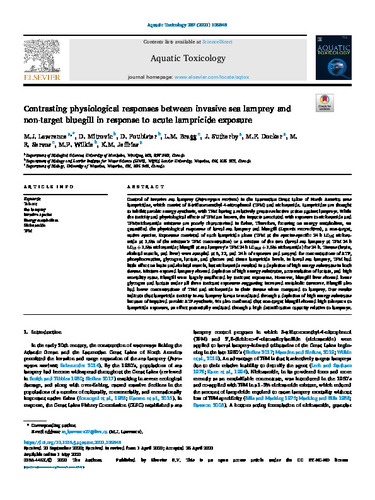 Control of invasive sea lamprey (Petromyzon marinus) in the Laurentian Great Lakes of North America uses lampricides, which consist of 3-trifluoromethyl-4-nitrophenol (TFM) and niclosamide. Lampricides are thought to inhibit aerobic energy synthesis, with TFM having a relatively greater selective action against lampreys. While the toxicity and physiological effects of TFM are known, the impacts associated with exposure to niclosamide and TFM:niclosamide mixtures are poorly characterized in fishes. Therefore, focusing on energy metabolism, we quantified the physiological responses of larval sea lamprey and bluegill (Lepomis macrochirus), a non-target, native species. Exposures consisted of each lampricide alone (TFM at the species-specific 24 h LC10; niclosamide at 1.5% of the mixture's TFM concentration) or a mixture of the two (larval sea lamprey at TFM 24 h LC10 + 1.5% niclosamide; bluegill at sea lamprey's TFM 24 h LC99.9 + 1.5% niclosamide) for 24 h. Tissues (brain, skeletal muscle, and liver) were sampled at 6, 12, and 24 h of exposure and assayed for concentrations of ATP, phosphocreatine, glycogen, lactate, and glucose and tissue lampricide levels. In larval sea lamprey, TFM had little effect on brain and skeletal muscle, but niclosamide resulted in a depletion of high energy substrates in both tissues. Mixture-exposed lamprey showed depletion of high energy substrates, accumulation of lactate, and high mortality rates. Bluegill were largely unaffected by toxicant exposures. However, bluegill liver showed lower glycogen and lactate under all three toxicant exposures suggesting increased metabolic turnover. Bluegill also had lower concentrations of TFM and niclosamide in their tissues when compared to lamprey. Our results indicate that lampricide toxicity in sea lamprey larvae is mediated through a depletion of high energy substrates because of impaired aerobic ATP synthesis. We also confirmed that non-target bluegill showed high tolerance to lampricide exposure, an effect potentially mediated through a high detoxification capacity relative to lampreys.