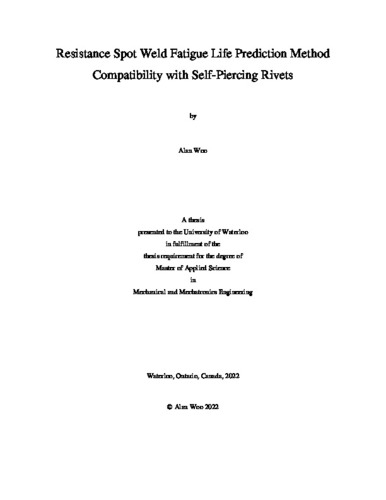 The Resistance Spot Weld (RSW) is traditional method for structural sheet metal joining with well established durability assessment techniques and methodologies. With increased prevalence of multi-material automotive structures to optimize vehicle light weighting for increased product quality and environmental concerns, traditional joining methods are limited in their capabilities. Alternative joining methods are required that are capable of joining dissimilar materials while maintaining strength and durability. The Self Piercing Rivet (SPR) is an alternative joining method capable of achieving this requirement and providing other economical and manufacturing workplace benefits. Durability assessment of sheet metal joints is essential for the optimum design of automotive sheet metal structures. While there is no established fatigue life prediction model for SPR joints, Rupp’s model is a well established fatigue life prediction method for the RSW joint with a modernized adaptation available in the commercial software nCode DesignLife. The Rupp’s model was chosen due to prevalence in industry use, computational efficiency, and ability to capture various loading conditions. The only requirements of this methodology are specimen level experimental fatigue lives and low element count finite element models. The purpose of this study is to investigate the compatibility of SPR joints with the nCode Rupp’s model intended RSW joints. An initial study is made with SPR compatibility with the nCode Rupp’s model with uniaxially loaded SPR specimens of various configurations collected from literature. Results of this study showed that Rupp’s model is compatible with uniaxially loaded SPR specimens and provided confidence to extend this study to cross-tension multiaxially loaded specimens. Experimental work was performed to obtain fatigue lives of dissimilar thickness Al 6016 SPR joints and dissimilar material Al 6016 and DX54D steel joints under uniaxial and multiaxial loading. Experimentation yielded a pool of data with documentation on failure modes of both joints. Further investigation on the compatibility of nCode Rupp’s model was performed with this newly obtained set of data which introduced a wider range of specimens for fatigue life prediction. Compatibility and performance of nCode Rupp’s model was clearly seen with this second study. Clear differences in geometry and joining mechanisms exist between SPR and RSW joints. Studies were performed to investigate these differences with finite elements to understand the differences in stress state of the two joint types. In uniaxial tensile loading of SPR joints Rupp’s model overpredicts bending stresses due to slippage allowed by SPR mechanical interlock whereas RSW joints are completely fused. In uniaxial shear loading of SPR joints Rupp’s model under-predicts the bending stresses due to the out of plane deformation in the top sheet causing a greater moment arm. Compatibility of nCode Rupp’s model is validated for uniaxially and multiaxially loaded dissimilar material and thickness cross-tension SPR specimens with a collection of experimental results and failure mode documentation.