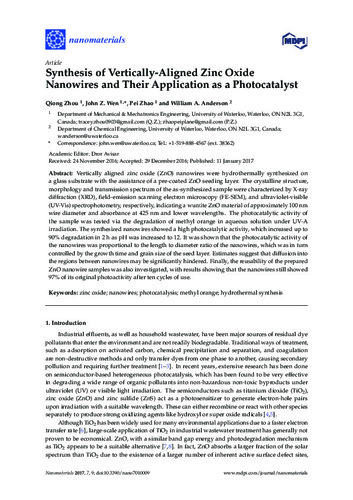 Synthesis of Vertically-Aligned Zinc Oxide Nanowires and Their Application as a Photocatalyst.pdf (805.2Kb)

Vertically aligned zinc oxide (ZnO) nanowires were hydrothermally synthesized on a glass substrate with the assistance of a pre-coated ZnO seeding layer. The crystalline structure, morphology and transmission spectrum of the as-synthesized sample were characterized by X-ray diffraction (XRD), field-emission scanning electron microscopy (FE-SEM), and ultraviolet-visible (UV-Vis) spectrophotometry, respectively, indicating a wurzite ZnO material of approximately 100 nm wire diameter and absorbance at 425 nm and lower wavelengths. The photocatalytic activity of the sample was tested via the degradation of methyl orange in aqueous solution under UV-A irradiation. The synthesized nanowires showed a high photocatalytic activity, which increased up to 90% degradation in 2 h as pH was increased to 12. It was shown that the photocatalytic activity of the nanowires was proportional to the length to diameter ratio of the nanowires, which was in turn controlled by the growth time and grain size of the seed layer. Estimates suggest that diffusion into the regions between nanowires may be significantly hindered. Finally, the reusability of the prepared ZnO nanowire samples was also investigated, with results showing that the nanowires still showed 97% of its original photoactivity after ten cycles of use.